Standard White - 100%
“The Obey Omnis was the poster child of the golden age of rallying, a period of deregulated innocence when a turbo-charged tin can could plough through a crowd of spectators on a muddy embankment and there wasn't a damn thing the government could do about it. This is one for the fans.”
— Southern San Andreas Super Autos description.

The Obey Omnis is a two-door compact rally car featured in Grand Theft Auto Online as part of the Cunning Stunts update.

The Omnis is mainly based on the Audi Quattro (specifically the Sport Quattro S1 E2 Group B rally car), as well as taking side/rear inspiration from the Alfa Romeo Alfetta GT coupé and the Toyota 222D in the rear lighting units. The frontal area in particular takes influence from the Fiat 131 Rally, such as the front indicators and lower grille.

The vehicle is depicted as a compact car with extensive rally modifications around it. The front features a wide splitter with two open sections, with the driver-side one sporting a racing hook. The area above it is occupied by the flat bumper and a set of lower intakes and white/amber lamps, which feature four rally lights and a small identification plaque that acts as the license plate. The upper area features a plastic, lightweight grille/front with twin circular headlamps on the edges and the Obey logo on the centre. Its bonnet sports a central intake, bolt-on vents on the sides and thin intakes near the windscreen, along with safety pins.

On the sides, the fender and skirting area is occupied by a wide-body kit that also includes the aforementioned front splitter, where the front fenders have a front curvature, plastic fins and single exit vents on the rear, while the rear fenders have dual bolt-on front intakes and rear exit vents. The cabin area features plastic trim around the windows and bolt-on side and rear window frames. The windscreen features a banner with "OBEY TEAM" marked on it, while the driver-side window appears to incorporate a slider kit (a smaller, openable compartment within the same wibdow), though only as a cosmetic feature. The rearmost pillars seem to have small vented sections near the rear fenders.

The rear area of the car is mostly occupied by the large racing wing, while the rear end is occupied by a bolt-on central vented section, a traditional license plate and rectangular tail lamps with plastic trimmings around these. What appears to be safety pins can be seen near the rear window and below the tail lamps, hinting at an apparent openable boot that is fixed due to the large wing. The bumper is relatively small, with a small single exit exhaust tube placed on the passenger side.

On the underside, the car uses a multi-link suspension system, with each of the four axle shafts having parallel trailing arms, plus a third arm connecting to the wheelbase of the vehicle, parallel to the wheels. Part of the exhaust system of the car, especially the exhaust silencer/muffler, appears to be protected by a small cage, in order to avoid damage to said component in the event of a rough landing. A set of plastic mudguards with the Obey marking can be seen behind each wheel.

The interior of the car makes use of steel foot rests and sport seats with race seatbelts, along with door pull straps. The Omnis includes many switches and buttons across the interior, as well as an RPM indicator placed in the gauge cluster, below the analog dials. The steering wheel features the manufacturer emblem on the centre, while a large extended gear-shifter is centralized between the seats. Also, a radio is seen located under the dashboard.

The vehicle's bodywork and the stitches on the steering wheel are painted in a primary colour, while the interior, cabin roll cage and brake calipers are painted in a secondary colour. Although not accessible, it has a tertiary colour for the cage paddings and a dial colour, which are set to black in purchased examples and white in those generated in Content Creator. Its wheels are a derivative of the "Five Star" rims available in Los Santos Customs, wrapped in Atomic Rally high-profile, all-terrain tyres with detailed tread patterns. The stock wheel rims are painted with the "Wheel" color.

The vehicle, as expected, performs well on paved surfaces. The car also has great, nimble steering, allowing quick maneuvers to be carried out instantly. The compact design gives it good ability to avoid attackers.

Off-road, the vehicle behaves almost as one with knowledge of Group B rally cars would expect. The car's engine is able to propel it to a good top speed, though not quite as high a top speed as the other Group B/ Group A rally cars in the sports class. The cornering ability of the car on loose gravel and dirt surfaces is very good, thanks to the car's fairly short wheelbase and AWD powertrain. Despite the Omnis' relatively high weight, it does have good grip off-road, though there is a slight tendency for the rear end to loosen up if throttle control if improperly managed. The car's relatively low centre of mass allows a driver to attack banks and bumps without having to worry too much about the car tipping onto two wheels or rolling over.

The engine sound is very high revving similar to the Bifta and the Kuruma, and its in-game model appears to be a twin-cam 4-cylinder engine, labeled with the Obey logo. The car also sports a gentle turbo hiss, along with a blow-off valve occasionally heard. As expected, the vehicle also sports a 5-speed gearbox and an all wheel drive layout with equal torque distribution.

An Omnis shown in the promotional artwork.

Front view of the Omnis in the Cunning Stunts update trailer.

Rear view of the Omnis. 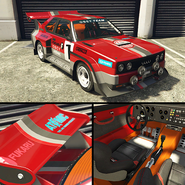 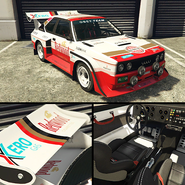 The Omnis on the updated Rockstar Games Social Club.

The Omnis in the cinematic preview on GTA Online Rockstar Games Social Club.