Its name is a derivative of the word "pish", a Scottish variant of "piss", a term for urine or urination. This is one of the many Scottish meta-jokes in the Grand Theft Auto series, as the game was developed in Scotland. In GTA San Andreas, it can be seen in a 24/7 shop and also in any bar. In Manhunt 2, Old Pissh Draft bottles appears during the final cutscene of the episode Red Light. 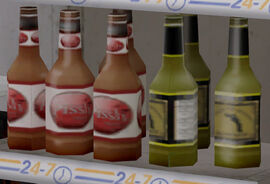