Shortly before the events of GTA III, the Old Oriental Gentleman was arrested after arriving in Liberty City on a private jet plane from an "unknown departure point somewhere in East Asia", for "failing to satisfy the INS that he had a valid reason for entering the country" and having no proper travel documents (including a passport and visa, "nor a platinum credit card to bribe his way through customs"). As a result, he was set to be delivered to a high security penitentiary before being deported in October 2001.

The Old Oriental Gentleman in his prison uniform. (Mission:Give Me Liberty) 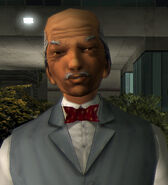 The Old Oriental Gentleman in his casual uniform. (Mission:Liberator)