GTA Wiki
Register
Don't have an account?
Sign In
Advertisement
in: Hobbies and Pastimes, Races, Races in GTA V,
and 4 more
English

View source
watch 02:46
The Quarry - The Loop
Do you like this video?
Play Sound
Not to be confused with Offroad Races in Grand Theft Auto Online.

Offroad Races are unlocked after the mission Mr. Philips, by a text message sent by Ron. Unlike the Hao Street Races, the offroad races can be completed by any Protagonist. To unlock a race, the player must complete the previous race. Earning medals in races counts towards the Hobbies and Pastimes part of the 100% Completion in GTA V. There are 4 races with bikes and 2 with off-road trucks. Winning the first race as each protagonist will award each one the Moto X outfit in their respective wardrobes.

Players can use modified personal vehicles as long as they comply with the vehicle class for the race, otherwise the player will be provided a random vehicle on the start grid.

The race starts at the Raton Canyon near the Pacific Ocean and follows the road towards the Alamo Sea. The race can be completed on either a Motorcycle or an ATV. The reward for winning the race is $500.

This race starts at Galileo Road in the Great Chaparral and ends at Route 68. The race has to be completed in an off-road vehicle like any SUV or pick-up. The reward for winning the race is $500.

Mineward spiral is the second offroad race on an ATV or a motorcycle. It's a race around the Davis Quartz. Winning the race earns the player $500. The race is open from 20:00 to 03:00.

This race runs along Cassidy Creek from the Alamo Sea towards the Pacific Ocean, and finishes at the start of the first race, Canyon Cliffs. The race is on ATVs or motorcycles. The reward for this race is $500.

This is the last ATV/Motorcycle race. It starts at Marina Drive in Sandy Shores near the Alamo Sea, where the final Triathlon also begins. It runs along the coast of the Alamo Sea and ends in Grapeseed. The reward for the race is $500. 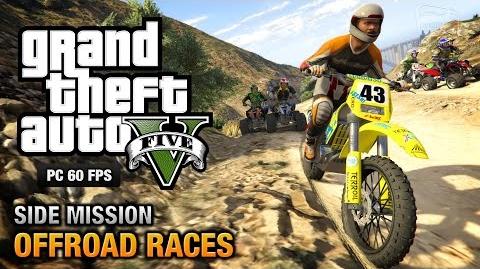