GTA Wiki
Register
Don't have an account?
Sign In
Advertisement
in: Vehicles, Ships, Vehicles in GTA V,
and 2 more
English

It is a large Panamax class container freighter with an unrealistically low forward draft of 7.8 meters and an aft draft marked at 10 meters.

It has a tall superstructure with eight levels above the deck with the bridge topmost. There is a radio and radar mast at the top of the superstructure and another radio mast at the bow. The exhaust stack is marked with a black with blue stripe livery. There are two large orange enclosed lifeboat/tenders mounted, one on each side of the second deck and two life raft containers mounted beside them. A series of external stairways provide access between decks of the superstructure.

The hull is painted black with red below the Plimsoll Line. The superstructure is painted white with the words "SAFETY FIRST" in red. The main deck is painted grey. The bow is marked with the name of the ship painted in white on either side and it is also on the stern along with the numbers 2347. There is no home port of registration marked on the stern.

The interior is completely inaccessible to the player.

In GTA V, it can be found in the Terminal district of the Port of Los Santos, in San Andreas. It is located near the Daisy Lee, another container cargo ship. 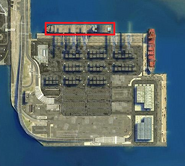