Ocean Drive as viewed from north.

Wikipedia has an article on:
Ocean Drive

Ocean Drive is analogous to the real-life Ocean Drive in South Beach, Miami, being a street running between a grassy partition, a walkway and the vast Vice City beach to the east, and a predominantly Art Deco and Streamline Moderne urbanscape to the west; the Ocean Beach lighthouse is just east off the southern end of Ocean Drive.

Being in close proximity to a well known beach, it is not uncommon for the player to encounter swimsuit-clad pedestrians in the day and contemporary party attires at night along the road. Skating pedestrians also frequent paved areas along the street, and strolling lifeguards were added in GTA Vice City Stories.

There are large numbers of landmarks dotted along Ocean Drive, most being Art Deco and Streamline Moderne hotels, cafes and restaurants on the west side, reflecting the aesthetics of the real-life Ocean Drive. However, the vast majority of these buildings are non-interactive or have no interiors; only two buildings in GTA Vice City are exceptions. The vast majority of buildings along Ocean Drive are retained in GTA Vice City Stories, but were cosmetically retouched, with the names of buildings omitted.

The various landmarks along Ocean Drive are as depicted using GTA Vice City screenshots in the following gallery (note that certain buildings are duplicated): 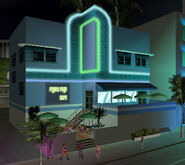 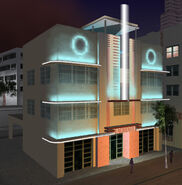 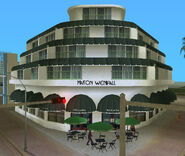 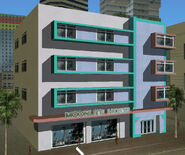 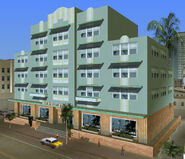 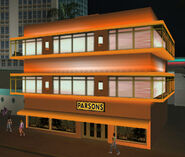 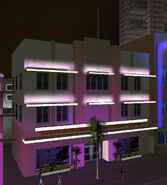 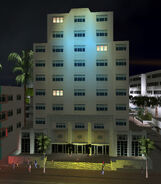 Unnamed building based on the Tides Hotel. 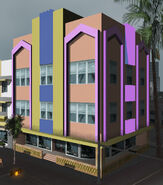 Unnamed building based on the Majestic Hotel. 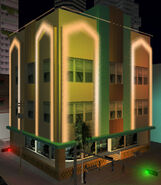 Two unnamed buildings; the building to the right is based on the Imperial Hotel.

Unnamed building based on the Shore Park Hotel.