The Ocean Beach Church is a religious department for Catholic Christians in Grand Theft Auto: Vice City. It is located in the south-western region of Ocean Beach, near the Ammu-Nation.

The Church has an Hexagram inscribed on its glass stained window, a religious recognition for Catholic Christians, solely from Balkan Countries. Unlike other churches in the GTA series, it doesn't feature any particular aspects of the Church, except for the glass stained window. It occupies an extensive area, including an alley.

The building is based on the former Beth Jacob Synagogue located in the Miami Beach, Florida, which is now the Jewish Museum of Florida.

The Hexagram on the glass stained window. 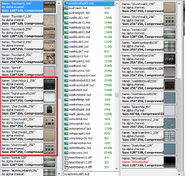 The internal files of the Church, marked in red.

Another view of the Church.

Hexagram symbols on the door of the Church.

An alley occupied by the Church.
Add a photo to this gallery
Retrieved from "https://gta.fandom.com/wiki/Ocean_Beach_Church?oldid=1150300"
Community content is available under CC-BY-SA unless otherwise noted.