Start a Wiki
Grand Theft Auto V introduces a new complex transportation network of various different numbered highways in San Andreas (also called routes or freeways), which are a system of interconnecting roads and highways that crisscross the state of San Andreas. Routes usually consist of only two lane roads with multi-lane roads and freeways in some sections. Grand Theft Auto V has the most realistic and extensive freeway system of any other GTA game to date. Some of these routes are based on the leaked official GTA V map, which included route markers, while others are signed in the game itself.

The system is based on the real-life numbering system in the United States, but with some differences. Rural major routes (such as Routes 1 and 13) are signed with U.S. Route shields, while minor urban routes (such as Routes 14 and 17) are marked on freeway guide signs with generic state highway markers, which are also used in real life for the state highway markers in Delaware, Iowa, Kentucky, Mississippi, and New Jersey. The interstate system almost always consists of multi-lane freeways and are usually traveled on more than the Routes. 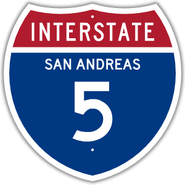 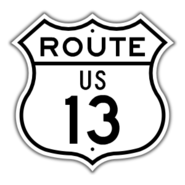 Rural (U.S. Route)
Add a photo to this gallery

The Interstate System, officially the Dwight D. Eisenhower National System of Interstate and Defense Highways in real life, is a network of highways in the state of San Andreas that circulates the Los Santos metropolitan area before ending or merging into other roads. There are four Interstate highways: Los Santos Freeway, Del Perro Freeway, Olympic Freeway, and the La Puerta Freeway.

The highway names begin with an "I" prefix and then a number directly after a dash (i.e. I-4). The system exists of four highways, however, I-3 is absent in the game. Along with the highways, Grand Theft Auto V has the most extensive freeway system in a Grand Theft Auto game.

Retrieved from "https://gta.fandom.com/wiki/Numbered_Highways_in_San_Andreas?oldid=1154072"
Community content is available under CC-BY-SA unless otherwise noted.