GTA Wiki
Register
Don't have an account?
Sign In
Advertisement
in: Beta, Characters in GTA III, Characters,
and 2 more
English

Novy is a German musician cut from Grand Theft Auto III. He was due to be voiced by German producer, DJ and musician Tom Novy himself.

He originally appeared along with one of his songs "Back To The Streets" (which was intended to air on the radio station Head Radio), which can also be heard in one of the GTA III trailers. Both Novy and his song were removed from the final game for unknown reasons, despite Novy's model and texture still being in the games files. Novy is playable through modifications on PC, however the model of the PC version is corrupt.

Novy's description is a white male with a brown crew-cut and a goatee. He also wears a blue shirt, blue jeans, and black two-tone sneakers.

Three different variations of Novy. From left to right: Novy appearing in-game with use of the PS2 model, Novy in the skins directory using PC model, and Novy in-game with PC model. 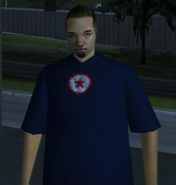 Closer look of the in-game model of Novy.