Standard White - 100%
“No, you didn't misread anything. This is a Lampadati. And an SUV. At the same time. Why? Who can say. But if someone tells you they crossbred a thoroughbred race horse with a hippo, do you question their motives? No, you buy it, take a selfie with it, throw it in storage, and start bragging to your friends.﻿﻿”
— Legendary Motorsport description.

The Lampadati Novak is a high-end crossover SUV featured in Grand Theft Auto Online as part of the continuation of The Diamond Casino & Resort update, released on November 7, 2019, during the Novak Week event.

The vehicle is primarily based on the Maserati Levante, with certain elements from the Jaguar F-Pace and Alfa Romeo Stelvio. Its headlights draw inspirations from the sixth generation Ford Mustang, while its taillights bear an almost exact resemblance to the second generation Ford Fusion. Its bottom side vents are reminiscent of the custom 2016 Mercedes GLE Coupe Inferno made by TopCar Design.

The Novak features a rounded profile and a sporty design, where the front end is largely dominated by the intakes at the bottom and the mesh grille above. Its headlamps are located in black housings, with the inner ones being angled light strips and the outer ones being the circular main lamps, turn signals and smaller units above the same turn signals. The bonnet features slightly bulged shapes from the upper line of the grille and lead towards the A-pillars of the cabin, as well as a narrower one around the centre. It also bears the manufacturer's badge at the front.

On the sides, the fenders are slightly wider than the rest of the car around the wheels, creating a flat profile on the arches. Small vents can be seen next to the front doors and concave portions run towards the rear intakes intended to direct air flow to the rear brakes. The car features frameless doors, just like the Levante does in real life. The greenhouse area is relatively simple, featuring black trim around the windows and black inner pillars, while the rear-view mirrors are supported by black frames near the A-pillars. The roof is notably curved around the back section and has a small roof spoiler with black trim just above the rear window.

The rear of the car is distinctive by the tail lamps, composed of red light stripes surrounding the set of turning and reverse lights. The rear compartment door also holds the inner set of tail lights, the manufacturer's badges and the license plate on a dedicated section. The lower side is composed of two rear red strips on the edges and a small diffuser, leaving space for the twin exhaust tubes.

The interior of the car is reused from the Toros, itself being a derivative of the one used in cars like the FMJ and the Tempesta. However, it is slightly narrower than the one on the aforementioned car. The steering wheel also bears the corresponding Lampadati badge on the horn cap.

The car's bodywork is painted in a primary colour, while the rear-view mirrors and the details on the engine are painted in a secondary colour. Although not accessible, a trim colour is applied to the stitches found around the dashboard, the steering wheel, the doors and the seats, which is always set to black. Its stock wheels appear to be a slightly larger variation of the "Supernova" SUV rims seen in Los Santos Customs.

In comparison to most SUVs, the Novak is a great performing vehicle of its class, with good speed and acceleration, only slightly below the more sportier Toros. Its handling is very responsive, able to take most corners and weave through traffic with no issues, and its off-road capabilities remain great for cruising around dirt roads and climbing steep hills, though players may need to keep control over bumps and kerbs, as it tends to lose control easily. Another downside is its light weight, as it does not push other cars as easily as heavier SUVs, particularly the Granger and its law enforcement variants.

The Novak has two Advanced Flags enabled.[1] While the purpose of the second flag is yet unknown, the first flag increases the vehicle's suspension "springiness", causing it to bounce excessively while driving.

The Novak is powered by what appears to be a V-shaped engine, coupled to a 8-speed gearbox in a front engine, all wheel drive layout (40-60, front to rear distribution). Although its engine model is supposed to resemble a V6 engine from its main inspiration, it lacks manifolds or any detail that could indicate its exact configuration. The engine sound appears to be an edited variation of the one used in cars like the Schafter V12 and the Nightshark.

Alternative badge, used in an advert. 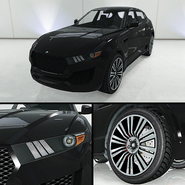 The Novak on Legendary Motorsport.

The Novak on the updated Rockstar Games Social Club.

The Novak in the cinematic preview on Rockstar Games Social Club. 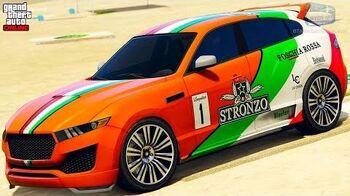