GTA Wiki
Register
Don't have an account?
Sign In
Advertisement
in: Crossovers, Missions, Missions in The Ballad of Gay Tony
English

View source
For the achievement/trophy in Grand Theft Auto III - The Definitive Edition, see Not So Fast (Achievement).

This mission crosses over with Museum Piece and Collector's Item.

Tony informs Luis about the diamond deal at The Libertonian.

In the Crosshairs
Ladies' Night

“Those diamonds, I heard they're being sold soon. At The Libertonian, of all places. I thought maybe we could go down there, put in a low ball bid and take them for ourselves, huh?”
— Gay Tony.

Not So Fast is a mission in The Ballad of Gay Tony given to Luis by Gay Tony from Hercules. It ties in with Museum Piece in Grand Theft Auto IV and Collector's Item in The Lost and Damned. This mission takes place from Luis' point of view, in which he ambushes the diamond exchange between Niko Bellic, Johnny Klebitz, and the Jewish Mob.

In this mission, Luis kills two guards and Mori Green during the diamond exchange. While Niko and Johnny fight Jewish mobsters in the right and left hallways, Luis drops down from the scaffolding and chases after Isaac Roth. Luis knocks Isaac unconscious and makes his way to the roof, where he escapes in Yusuf's gold-painted Buzzard after destroying three NOOSE Annihilators.

Upon completion the player is awarded the Diamonds Forever achievement.

You start from Hercules. Luis automatically phones Yusuf Amir to borrow his Buzzard, which now has gold painting. After the phone call, get to the West River Helipad, which is not far. Once in the Buzzard, fly to the roof of The Libertonian. Once there, go down the scaffolding and watch the deal cutscene from Luis' point of view. After the cutscene is finished, climb up the ladders and get back to your Buzzard and fly back to the helipad. Luis will call Tony and tell him to meet him by the helipad on the West River. However, three NOOSE Annihilators will force you to turn back and destroy them. It is not a walk in the park however, as they will shoot rockets from their chopper, as well as use their new explosive rounds on you. Use your miniguns to destroy them, as it might be hard to aim the rockets while you're swinging around. A skilled pilot will easily destroy the helicopters. Beginners might find it easier to simply land the Buzzard and shoot down the Annihilators with an RPG. Whatever method is used, after the helicopters are destroyed, return to the helipad. Tony will shout through his Schafter window "Hey Lou, arriving in style!" and Luis gives him the diamonds.

Troy holds Luis for a conversation.

Tony tells Luis that the diamonds that were stolen from them are being sold at The Libertonian.

Tony is obviously under the influence and cannot join Luis.

Get to Yusuf's chopper.

"Ain't no one gonna expect a golden chopper to shoot them to shit."

Fly to the roof of the Libertonian.

Climb down the scaffolding to the window overlooking the deal.

Luis climbs down the scaffolding.

The Jewish Mob's guards initiate and get shot by Luis.

Johnny Klebitz gets ahold of the money and flees.

Luis knocks out Isaac Roth and takes the diamonds.

Climbing up the latter back to the chopper.

Police response gets destroyed by Luis.

1st out of 3 Annihilators gets destroyed.

2nd out of 3 Annihilators gets destroyed.

3rd out of 3 Annihilators gets destroyed.

"Lesson learned: the guy in the golden chopper ain't fucking around."

Take the helicopter back to the helipad.

Luis hands the diamonds over to Tony. 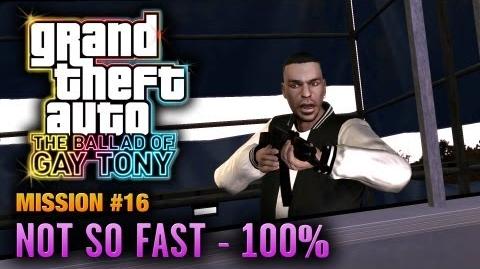