The North Point Mall as it appears in Grand Theft Auto: Vice City.

The mall is located in Vice Point, Vice City, and is a two-story mall with a H-shaped floor plan, featuring a large atrium area bisected by a central pedestrian bridge, escalators, and a large number of businesses primarily based on the edges of the floor space. The exterior of the mall connects to a multistorey car park and six street-level entrances. The mall appears to be based on the Aventura Mall in Aventura, Florida, featuring similar designs and aspects, including the now-demolished food courts.

Stores in the mall range from clothing, record stores and food courts, as well as an Ammu-Nation. In GTA: Vice City, the player can use the food courts to replenish their health as well as a Sprunk booth with a health pickup inside. In addition, the GTA: Vice City rendition of the mall features an Infernus on display intended as a prize from the mall's annual charity raffles, alongside a rampage. This can be stolen but cannot be driven out of the mall. In GTA: Vice City Stories, it features several red balloons, another rampage, and a BMX spawn point, which will start the Mashin' Up The Mall side-mission if the player rides it.

In GTA: Vice City, the "turf" inside the mall is owned by the Sharks, although the actual stores pay protection to the Vercetti Gang. A common occurrence in the mall during the night are groups of Street Criminals and Sharks, who will occasionally engage in fights with the Patrol Invest Group security and VCPD officers. Groups of Shoppers, who are classed as a gang, are seen around the mall during the daytime, although the gang is unarmed and will not engage in fights with the VCPD or PIGs, but will attack the player if provoked.

* Robberies: Stores which must be robbed for 100% Completion in GTA Vice City. 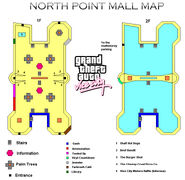 Map of the North Point Mall.
Add a photo to this gallery

An Infernus on display in the mall.
Add a photo to this gallery

Barzini's
Add a photo to this gallery

Retrieved from "https://gta.fandom.com/wiki/North_Point_Mall?oldid=1219069"
Community content is available under CC-BY-SA unless otherwise noted.