(While Dwayne was incarcerated or after his determined death)

The Triangle Club in Northern Gardens

The North Holland Hustlers are an African-American street gang in Grand Theft Auto IV, operating in northern Algonquin, Liberty City, that specialize in dealing crack cocaine, but, as the name suggests, probably involved in all types of criminal activity. The gang also might have ties to the Pavano Family through Joe Corrola who supplies dealers in North Holland with heroin.

The year of foundation of the gang is unknown, but one of the members, Jayvon Simson, was a small-time drug dealer during the crack boom in early 90's. It is not confirmed though, that North Holland Hustlers existed by that time and if Jayvon was a member. He later avoided arrest by becoming a police informant and his testimony was crucial in several high profile convictions including that of Dwayne Forge. By 2008 Jayvon became or remained member of North Holland Hustlers.

During the storyline of Grand Theft Auto IV, Niko Bellic encounters members of the gang twice, both times the encounter leads to murder. Niko kills Marlon Bridges, young and ambitious drug dealer from North Holland Hustlers, for insulting Playboy X. It seems that the insults were the part of Marlon's expansion on Playboy X's turf.

He later kills Jayvon Simson as well, that time ordered by Dwayne Forge. It is unknown if the hit was called because Jayvon was an informant or because he hangs out with Dwayne's ex-girlfriend. Most probably Dwayne's antipathy towards Jayvon was grown on both of those matters.

Judging by their conflicts with Playboy X and Dwayne Forge, the gang is probably small-time and can't afford itself an open war with such opponents, prefering insults and denunciations. LCPD Database also calls Playboy X's syndicate "dominant dealing operation" comparing to the Marlon's.

Members of the gang can be idfentified by their flashy, hip-hop inspired attire, such as baggy clothing, brightly coloured tracksuits and jackets, puffer jackets with furry hoods as well as sneakers and Hinterland boots. The gang members can often be seen hanging in groups around the projects in North Holland and Northwood as well as walking the streets and driving vehicles around these areas. 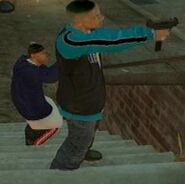 North Holland Hustlers in a shoot-out.

Members of the North Holland Hustlers.