North Holland is an area in northern Algonquin, Liberty City, bordered to the north by Wardite Street (Northwood), to the east by Exeter Avenue (East Holland), to the south by Topaz Street (Middle Park and Varsity Heights), and to the west by the West River.

North Holland is easily based on Harlem, a northern Manhattan, New York City neighborhood that was known for crime throughout the 20th century, but is currently experiencing gentrification. The choice of name for North Holland is presumably based on the location of Haarlem (which Harlem takes its name from), the provincial capital of Noord-Holland, (Translation: North Holland), Netherlands. Among the landmarks spoofed in the district include Hotel Theresa, known in game as "Hotel Hamilton", located on both sides of the East Holland-North Holland border, the 125th Street station as the elevated Frankfort High station, the Harlem Hospital Center as the Holland Hospital Center, and the second Cotton Club as the Linen Lounge.

Playboy's Loft is located in North Holland and is available as a safehouse if the player chooses to kill him. This safehouse is the only one in the game to feature an exterior balcony. In the Ballad of Gay Tony, Luis' Apartment is in North Holland.

If you go to Vauxite Street in North Holland, there is a red accessible door to the west of the Modo store. If you can get the police to follow you when you have a wanted level, it is possible to accomplish this glitch. So when you have lured them up the stairs, go to the rooftop and head south around the small building and go down the stairs and you will find a plank. Jump over the gap to the other building (Police still following) and find cover behind the brick wall. Up your wanted level and the police will attempt to jump over the gap between the two buildings. However every police officer will just fall of the edge of the plank, without even jumping. The police officer just walks off. 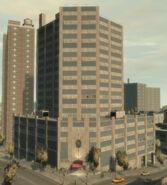 The Algonquin TW@ at the base of Hotel Hamilton.

The Linen Lounge.
Add a photo to this gallery

Retrieved from "https://gta.fandom.com/wiki/North_Holland?oldid=644111"
Community content is available under CC-BY-SA unless otherwise noted.