North Dock is a boatyard in Cayo Perico, Colombia, which appears as an infiltration and escape point for The Cayo Perico Heist in Grand Theft Auto Online.

Juan Strickler's cartel guards uses the dock as a port for drug shipment distribution. A Longfin boat can be found docked in the area, which Pavel will describe as a "classic Cartel transport craft" for drugs. This is the first infiltration and escape point discovered by the player during the Heist Prep: Gather Intel.

A water tower is located at the west side of the dock. If the player has collected a Cutting Powder box, they can contaminate the island's water supply by throwing the powder inside the water tower, which will weaken the guards and making their aim less accurate during The Cayo Perico Heist.

North Dock as seen in the official trailer. 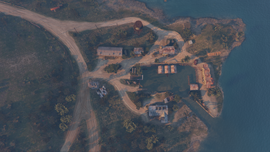