North Chumash is a small unincorporated community located in Blaine County, San Andreas that appears in Grand Theft Auto V and Grand Theft Auto Online. It is situated north of Fort Zancudo, southwest of the Chiliad Mountain State Wilderness, west of Mount Josiah and sits on the coastline of the Pacific Ocean.

North Chumash is a small oceanside area that stretches along a small portion of the western coast of San Andreas that borders the Pacific Ocean. With Raton Canyon to the north, Fort Zancudo to the south, and Mount Josiah to the east, this area has a beach that meets the Pacific Ocean, and the only roads being two small paths that lead into the canyon, one path that leads to the beach, and the Great Ocean Highway that runs right through the area.

In Story Mode and Online, the beachfront is the scene of non-interactive NPC Sanchez or Blazer drag racing in the evenings from 3 pm until around 10 pm. 2 riders at a time race (slowly) from the Fort Zancudo end to the Raton Canyon end. Several canvas gazebos and beach umbrellas are set up at each end with beach fires. At the finish zone in the Enhanced Version, there are two spawn spots for NPC-modified vehicles, the BF Bifta and Canis Kalahari at one spot and the BF Surfer at the other.

The mission Dirt Road can be started here.

North Chumash is likely based on the Pacific Coast Highway between Malibu and Port Hueneme.

The Lost members can be seen hanging inside and around the Hookies bar and seafood restaurant at most times of the day, due to it being the center for a crew of drug dealers from Sandy Shores that run drugs through the Raton Canyon for The Lost. Some members can sometimes be seen riding away from Hookies in groups of five on their motorcycles. They will usually attack Trevor Philips on sight.

The Hookies bar and seafood restaurant is available for purchase by Michael De Santa or Franklin Clinton for $600,000 after completing the mission Nervous Ron but not by Trevor Philips, due to his violent conflict with The Lost, who use Hookies as an area of congregation.

The 2-car garage 2000 Great Ocean Highway, located next to Hookies, is available for the player to purchase for $31,500. 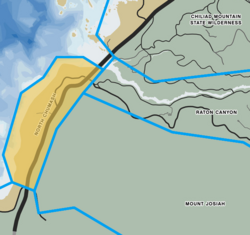 North Chumash on the map.

A member of The Lost and his "old lady".

Some members of The Lost with their motorcycles parked in the background.

People sitting on the beach.

An Online player at the start of an NPC Blazer race.

Franklin Clinton observing the finish of a Blazer race.

NPC-modified Bifta and Surfer spawn points at the finish of an Online race.