GTA Wiki
Register
Don't have an account?
Sign In
Advertisement
in: Pages with unsourced statements, Characters, Characters in GTA V,
and 2 more
English

Evan Neumann
“Ah, Norm, came across as a bit of an idiot, but could be useful.”

Norm idolizes Michael's criminal career and shows his excitement over working with him in heists. He will refer to him as "Boss" in a respectful tone. However, he won't take any insults from the other crew members. He has low stats, will often use weaker weapons and his cut is only 7%.

Norm used to be a family man, with a wife and three children, but after he discovered that Michael Townley died, he changed completely. He robbed a warehouse which earned him $10,000, which he promptly spent on drugs and prostitutes. He abandoned his family and never looked back. Norm has an extreme fandom for Michael, making compliments and praises every time that he is on a mission with him. He also seems to not care about anyone besides Michael, to the point that if he survives the covert approach of The Bureau Raid, he says the other team member probably survived more than he should, thanks to Michael's leadership.

If he is chosen as the gunman for The Jewel Store Job and the loud approach is chosen, he will do a poor job of crowd control as one of the hostages tries to escape, forcing Michael to deal with them, and if the smart approach is chosen, he will drop some of the jewelry he collects, preventing the player from earning the most possible cash. And in either approach, his bike will apparently bust up before entering the sewer tunnels, causing him to lose control, fall off and be killed, dropping the jewels he was carrying: the bag can be collected afterwards by Franklin.

He will also get killed in the The Paleto Score when a police car crashes into him and crushes him against a wall, he will struggle for his life, asking Michael if he did him proud, but will end up dead anyway. His bag with the money of the score, can also be picked up here: it is near his body.

He will get killed in the covert approach of The Bureau Raid too, during the escape from the FIB building, an explosion will kill him instantly. However, if he is chosen along with Daryl Johns or Hugh Welsh, he or the other gunman will die randomly in the explosion. So, if Norm is killed in the escape, just repeat the mission until he is the one who survives. In the roof approach, he can survive with no complications.

In The Big Score, subtle approach, Norm will have trouble loading the Gauntlet if he is selected as the first gunman, making the crew lose almost $18,000,000 in gold, this can't be avoided even if he has experience from the FIB heist. If selected as the second gunman, there will be no consequences, regardless of his experience.

In the obvious approach, Norm will do a decent job being either the first or second gunman. It is important to know that if he is the second gunman and doesn't have previous experience, there will be more chances of him dying during the escape shootout against the police. The player should protect him, so the heist doesn't have any casualties. 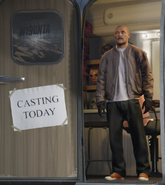