"Tell my father I can see whoever I like!"
―Anna Faustin

No Love Lost is a mission in Grand Theft Auto IV given to Niko Bellic by Russian Mafia boss Mikhail Faustin from his house in Beachgate.

Niko meets Mikhail Faustin at his mansion in Beachgate. Faustin explains that he wants Niko to kill The Lost MC biker Jason Michaels, who has been seeing Mikhail's daughter Anna. Mikhail tells Niko to look for the two around Funland.

Go to Funland, Niko will confront Jason, who rides off telling that The Lost will kick his ass. Mount the PCJ-600 parked nearby and chase Jason throughout Broker. It is possible to kill Jason during the chase by simple shooting at him until he finally dies, but that will take a lot of shoots, so be sure to not get too far from Jason. However, if the player takes too long to kill Jason, eventually he will call for backup in the form of more members of The Lost MC.

Jason and the other bikers will park near Meadows Park initiating a shootout with Niko, just kill all the bikers while being careful to not get killed.

Once Jason is killed, Niko calls Mikhail to inform him about the biker's death and saying that his daughter will probably not be very happy, Mikhail says that he doesn't care about happiness, only discipline and thanks Niko. 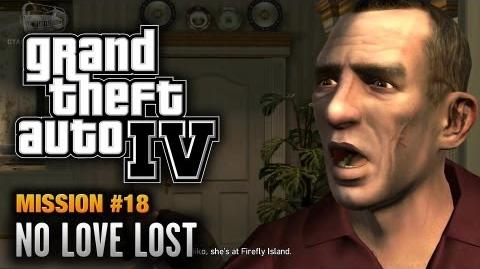 Retrieved from "https://gta.fandom.com/wiki/No_Love_Lost?oldid=847765"
Community content is available under CC-BY-SA unless otherwise noted.