Rescue Stanley, pick up the package, destroy the Vagos' cars and kill their leader.

41+
“So, I got my homie Stanley selling products to the Vagos in Rancho. Only I got a bad feeling since we jacked most of that stuff of them to begin with, and I'm told they got the whole block down there. For my peace of mind I'd like your ass down there and the lookout tip. Keep my dude safe and don't lose the product.”
— Description

No Hay Bronca is a mission in Grand Theft Auto Online given by Gerald to the player. It is available for up to 4 players.

Stanley, an associate of Gerald went to some warehouses in Rancho to have a drug meeting with Vagos members. However, the Vagos were aware that Gerald had bad and warring relationships to the Vagos and Stanley was his associate. So the Vagos kidnapped Stanley. Gerald suspected this and orders the player(s) to head to the meeting and rescue Stanley and plus, collect the package that Gerald wanted Stanley to take. After picking up the package and rescuing Stanley, more Vagos will block the entrance of the warehouses with SUVs. The players must escape and go to Gerald's apartment. There, the player(s) can pick up a jerry can and armor. Now, the team needs to go to another Vagos' meeting in Davis, with several members involved, but now the target is to destroy their vehicles and finally, kill their leader. 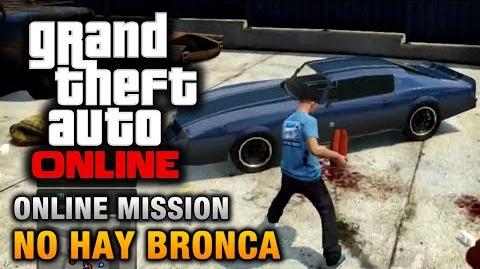