Luis racing with Mori and Brucie.

• ­Use the button to lower the platform.

• ­Wait for Brucie to get in the car.

• ­Use the button to lower the platform.

• ­Line up behind the Kibbutz brothers.

F620 and Bullet GT can now be requested from Henrique

"Are you Alpha or Omega? You think you can handle it?"
― Mori Kibbutz

No. 3 is the final mission given from Mori Kibbutz in the The Ballad of Gay Tony.

Mori gives headsets to Luis and Brucie for communication for the 'run', and says nothing further about what's about to happen.

Luis must go to a garage north of Middle Park where three cars are kept - a yellow Turismo (Mori's car), a blue F620 (Brucie's car) and a red and white Bullet GT (the player's car). The three line up and Mori takes the lead. The player must follow Mori and weave in and out between streets and police cars (due to Mori tipping off the cops to make things 'interesting' and Luis attains a three-star wanted level).

Luis is led by Mori through a narrow passage which takes skilled and alert driving. A chopper will fly between Luis and Brucie which shouldn't damage the cars. After this, Mori will lead the player to use ramps to jump between a few barges, finally losing the heat.

After returning to land, Luis, now finally free to speak his mind to Mori, berates him over his arrogance, stupidity, lack of empathy and his constant cruelty towards Brucie. Mori at first blows him off, taunting Brucie in the process, calling him the "marshmallow man" and a "pale piece of turd", only for his younger brother to finally snap and, after several exaggerated martial arts movements, punch him in the face, breaking his nose. Mori collapses and begins crying, reminding Brucie "never in the face". Apologizing, and telling Luis he will see him soon, Brucie leads his sobbing and whimpering brother away.

Complete the mission in 5:15
Have less than 20% Car Damage
Reach 140 mph Top Speed
Stayed close to the Kibbutz brothers through the pursuit 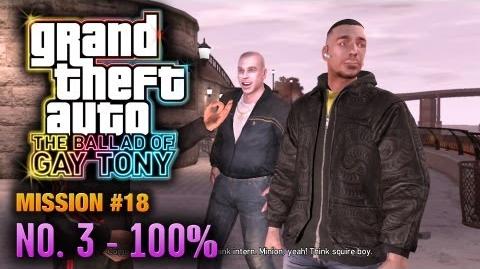 Retrieved from "https://gta.fandom.com/wiki/No._3?oldid=1288176"
Community content is available under CC-BY-SA unless otherwise noted.