View source
watch 02:46
The Quarry - The Loop
Do you like this video?
Play Sound
For the multiplayer character with the same name in GTA: Liberty City Stories, see No. 1.
Not to be confused with the The Ballad of Gay Tony mission No. 3.

Out of the Closet

Spoiler Warning: Plot details, ending details, or both are in the text which follows.
“I'm an immigrant and a hired gun, and you're a steroid junkie but we get along.”
— Niko Bellic, describing his friendship with Brucie Kibbutz

No. 1 is the final mission given to protagonist Niko Bellic by Brucie Kibbutz in his garage on BOABO.

Niko walks into Brucie's garage. Brucie and his assistant Lenny are working on a yellow and black Banshee he colloquially calls "The Bitch" and his "Favorite Ride". Brucie didn't do a good job tuning the car, and therefore it won't start, so he decides to borrow a yellow Comet from his friend and colleague, only known as Stevie or Steve.

Niko goes to get the car with Brucie, as marked on the radar. On arrival, Brucie will call attention to a chrome yellow Comet. Niko and Brucie enter it and drive to the starting location. The yellow marker will put the player behind the other racers. Once the player gets to the marker, the race will start.

When Niko wins the race, Brucie will be "jacked up" and wants him to take him home to work out, even though he did nothing. On the way to Brucie's apartment, Niko will ask what does Brucie does for a living and why he need so many people killed, Brucie says that he is business man that "make things happen" and the reason he asks people to kill others is because of his mood swings from "juicing" too much, once Niko discovers this, he decides to no longer work for Brucie, saying that he can't kill people just because Brucie feels like killing someone. Despite this, he still accepts hanging out with Brucie sometimes. When Niko finish this mission, Brucie will be so pleased that he will let him keep the car, offering to give The Bitch to Stevie as compensation. Niko drops Brucie off at his loft and the mission is complete.

From now on, Brucie will be one of the friends available on Niko's cell phone. He will call later because the other racers want a rematch. This will open up an additional activity: Brucie's Races. 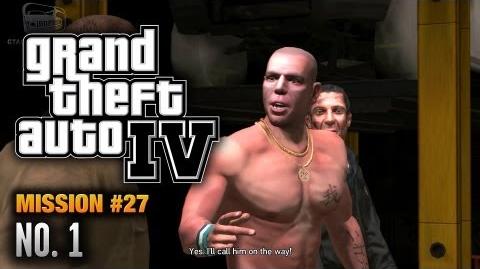 In some cases, the mission will not give the player a money reward listed in the rewards section for beating the mission. This glitch has occurred on the PS3 version.