luxor
“The cutting edge has always had its naysayers, "What about carbon emissions?" "Why shave 30 minutes off your coast-to-coast journey time in an age of video conferencing?" "Why is the toilet made of a rhino horn?" Fortunately the enemies of progress are completely inaudible when you and the other board members are daisy chaining at 40,000 feet.”
— Elitás Travel description.

The Buckingham Nimbus is a private jet featured in Grand Theft Auto Online as part of the Further Adventures in Finance and Felony update.

The Nimbus appears to take influence from the Cessna Citation X, especially in terms of the fuselage and rear wing design, as well as the similar stripes.

The aircraft is depicted with a similar fuselage design to the Shamal and Luxor, having a sharper nose, large cockpit windows, a left access ladder and dual hatches on the underside, housing the nose landing gear with dual wheels and two circular taxi lamps. On the middle section, the plane features numerous rounded windows and the angled wings with silver/chrome front surfaces, while the underside protrudes from the rest of the aircraft and houses the main landing gear. The tail boom/empennage mounts the engines on either side and the T-tail on the end, which is also taller and more angular than the ones from the Shamal and the Luxor. The vertical stabilizer bears a registration code that reads "NLS210R".

The interior of the aircraft shares the same instrument panel and the "Lazer" dial set from the Shamal and the Luxor, also using green screens with animated displays below. Similar to the Luxor Deluxe, it features a luxury interior, which includes a stand with bottles of champagne on it and a small room with four seats; with two seats facing to a small table that contains a bottle of champagne, two drinking cups and an ashtray with cigars on it. On both sides of the room compartment, there are two LCD screens with no text on it (since the interior is reused from that of the Luxor Deluxe, but having the "Buckingham Luxor" text removed). There is a second room with the same features as the first one, except by having only two seats on the right side of the plane, while the left side is occupied by an unused stand.

The aircraft's fuselage is painted with a primary color, while the secondary color is applied on the undercarriage. There are three swept back lines down the side of the fuselage to the empennage, where the upper one is classed as the secondary color and covers most of the vertical stabilizer, the middle one as the "wheel" color (which is always set to gray on purchased examples due to the wheel colour being set to the default alloy) and the lower stripe as the "pearlescent" color. It uses a set of industrial wheels also shared with the Shamal and the Luxor, being derived from industrial vehicles like the Mule, the Benson and the Phantom.

The Nimbus is quite a fast jet, possessing a top speed slightly higher than the Luxor's, albeit with slower acceleration. It also has better braking abilities than the aforementioned jet, although agility is not as good.

The aircraft is powered by twin turbofan engines, also sharing its engine sound with the Luxor and Shamal, albeit having a louder volume.

Upon being converted into a personal aircraft, the Nimbus can be repainted with a primary color and a secondary color. It is possible to change the third stripe via the pearlescent color given with the primary "metallic" color. However, due to the second stripe using the plane's "wheel" (color slot 4) color, the color of the stripe cannot be changed. 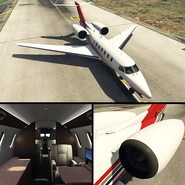 The Nimbus on Elitás Travel.

The Nimbus on the updated Rockstar Games Social Club.

The Nimbus in a cinematic preview on Rockstar Games Social Club.

The Nimbus in the Further Adventures in Finance and Felony update trailer.

Another view of the jet, seen from an office inside the Maze Bank Tower.