Standard White - 100%
Not to be confused with the Nightshade, a vintage muscle car in Grand Theft Auto Online.
“An armored SUV with sniper-proof glass, dual machine guns, and the option to attach an Anti-Aircraft Trailer. So, just an everyday Los Santos essential. Weapon customization available in the MOC or the Avenger.”
— Career Builder description.
“There's a special moment in the life of every billionaire when you realize that everyone else is trying to kill you and steal from you. And when the time comes, you want a vehicle built exclusively to cater to that paranoid delusion. Enter the Nightshark, where you can sit in perfect comfort behind tinted, sniper-proof glass as the filthy hordes press against your armored hull, then pull the trigger on the dual machine guns and relax as the car does all the hard work for you. Who's crazy now?”
— Warstock Cache & Carry description.

The HVY Nightshark is an armored four-door SUV featured in Grand Theft Auto Online as part of the Gunrunning update, released on August 8, 2017, during the Nightshark Week event.

The Nightshark was initially featured as a mission-only vehicle in the Mobile Operation mission Exit Strategy. However, as of the Nightshark Week event, it became available for purchase.

“There's a special moment in the life of every successful arms dealer when you realize that everyone else is out to kill you. And when the moment comes, you want a vehicle built exclusively to cater to that particular dilemma. Enter the HVY Nightshark, where you can unleash a hail of bullets in total comfort with its front-facing twin machine guns. Welcome to the new business class - now available exclusively from Warstock Cache & Carry.”
— Rockstar Newswire description.

The SUV is largely based on the Dartz Kombat, with elements from the Dartz Black Shark, predominately in the front design.

The Nightshark is depicted as an armored SUV with a large and bulky design. The front end is predominated by a heavy-duty bumper with a steel bar on the center, numerous holes above and trapezoid shapes on the edges. The upper area houses a mesh grille on the center with square lamps located ahead of it, while the outer sides have black wide housings with circular lights and dual turning lights. The hood has a bulged profile around the center and has three vented sections on either side.

The sides of the vehicle have bulky arches, small armor panels running through the lower sides and small side steps at the bottom, along with side-exit exhaust tips within the rear quarters of the vehicle. The cabin area has wide frames and is fitted with soundproof windows in a similar manner to the Cognoscenti and the Revolter. The roof area has circular fog lamps on the edges and three marker lights on the center, while the sides have two small loops on the front area and two long horizontal bars on the rear area.

The rear end is mostly dominated by a thick armor panel in the middle, with the rectangular tail lights seen beside it. The lower area features a bulky bumper housing a license plate, a steel bar and a tow hitch able to tow an Anti-Aircraft Trailer. As expected from an off-road vehicle, the Nightshark features sump guards on both axles, which are seemingly behind the bumpers.

The interior of the vehicle is shared with the Insurgent and the Insurgent Pick-Up, using a digital dial set with various components usually seen on industrial trucks. The back section has a rather worn appearance.

The vehicle is prominently painted in a primary color, with the trapezium portions and holes of the front bumper, the steel bumper bars, the side armor panels and the side roof bars painted in a secondary color. The vehicle uses large industrial wheels with high-profile tires, sharing the same steel rim design with the ones from the Insurgent and its armed variant. These rims can also support a dedicated color (although only naturally-generated examples may have one).

The vehicle is equipped with four retractable machine guns, which are located in the outermost holes of the front bumper. When selected, the small hatches open and the machine guns are exposed.

For an armored vehicle of this size, the Nightshark performs exceptionally well. It has great acceleration and good top speed, as well as great handling, able to sort most turns on the road, though one may experience slight understeer on sharp turns. The reinforced bumper also means it can push over other vehicles rather easily, without a drastic loss of speed. Its suspension is average for a car of its type, meaning it can keep its stability on bumpy terrain and uneven roads, but the ground clearance is seemingly low, often crashing into obstacles such as small barriers.

Like the Insurgent and its variants, the hood is completely sealed, meaning there is no way to reveal its engine (In fact, it lacks an engine model). The engine sound is similar to that of the Schafter V12, which sounds higher-revving and louder. When idle, the engine sound is the same one used on the Lynx.

Its only downside is that the windows are not bulletproof, meaning that players are vulnerable to gunfire. This can be partially remediated by installing window plates, as they cover most of the cabin and only leave a small opening, but still, players can be shot through there and the plates on the doors do not protect the occupants. The window plates also prevent the occupants from using any weapons at all (Less the front MGs).

Machine Gun: The driver has access to four front-facing machine guns, which perform the same as those of vehicles such as the Blazer Aqua and the Ruiner 2000. They have decent firepower against players and vehicles with none or light armor, but will struggle against heavily-armored vehicles.

Towing an Anti-Aircraft Trailer in collaboration with another player gives the vehicle increased potential, as the Nightshark lacks any sort of defensive capabilities against targets on either side and rear but is faster than most other vehicles that can tow it. The lack of armor often makes the trailer the first vehicle to lose during a combat.

The Nightshark is able to be customized in Los Santos Customs and other mod shops, although the liveries can only be accessed in the Vehicle Workshop inside a Mobile Operations Center or an Avenger.

* Denotes items that can only be unlocked for purchase via research in the Bunker property.
** Window tints are unavailable if a "Window Plates" option is installed.
E Awarded to players who logged during the Dixon Residency Week (August 7th, 2018 - August 13th, 2018), as part of the Guest List. 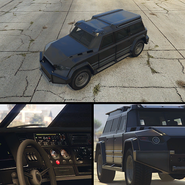 The Nightshark on Warstock Cache & Carry.

The Nightshark on the updated Rockstar Games Social Club.

The Nightshark in the cinematic preview on Rockstar Games Social Club.

Advert for the Nightshark in 2020. 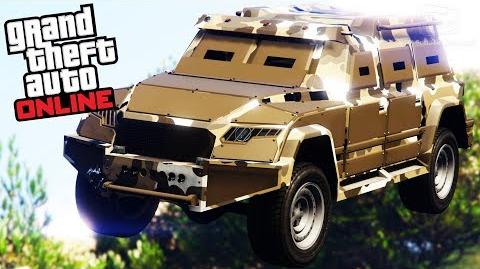