Standard White - 100%
Not to be confused with the Nightblade, a motorcycle in The Lost and Damned and Grand Theft Auto Online, or the Nightshark, an armoured SUV in GTA Online.
“Two-door muscle car, and the hottest piece of meat you’re likely to handle out of Liberty City’s Hercules.”
— Career Builder description.
“Don't be fooled by the elegant lines and composed styling: like every great muscle car before it, the Nightshade puts out more power than it (or you) can possibly handle. Few cars present as big as a risk to oncoming traffic, or look this good on the back of a tow truck.”
— Legendary Motorsport description.

The Imponte Nightshade is a two-door muscle car featured in Grand Theft Auto Online as part of the Executives and Other Criminals update.

The vehicle takes a large amount of influence from the 1970-1973 Chevrolet Camaro, especially in the front fascia, front grille, headlight arrangement and overall body shape. There is also a striking resemblance to the second generation Pontiac GTO (1968 - 1973), apparent in the lighting arrangement and front fascia. The rear lights are based on the 1970-1973 Pontiac Firebird light arrangement. The extended wheel arches are based on the Spectre Performance Camaro.

The Nightshade appears to be heavily customized with a chin spoiler on the front, wide fenders and wider rear wheels, along with sports wheels. Additional modifications can be installed to customize it into some sort of dragster. Its interior is the same "Dominator" interior and dials used on various muscle cars.

The primary color of the car is applied on the bodywork and the interior stitching, while the secondary color is applied on the center of the car, in the form of a wide stripe passing through it. Its stock wheels seem to use the 5-spoke rim design similar to some of the sport rims available at Los Santos Customs, but are flat in appearance and with a mostly squared end.

The Nightshade has acceptable acceleration and an average top speed for the class. Its handling is remarkably good, keeping some semblance of traction despite being a muscle car. Oversteer is less common than other Muscle cars and easier to correct. Its handling feels very nice, but this is mostly due to being underpowered compared to other Muscles, and it is therefore less viable for racing. In addition, wheelspin is a common sight when using the throttle at full power. Crash deformation is excellent, and it can take several head-on hits before showing any real damage.

According to the website, the Nightshade is stated to be powered by a 5-liter V8 capable of pushing 420bhp, and the badges state it is powered by a V8 turbo. Both statements make sense with the vehicle's engine model and spark plug textures, which show that it is indeed a single cam V8, coupled to a 5-speed gearbox in a front-engine, rear-wheel-drive layout. Its engine sound is the same as cars such as the Buccaneer.

The Nightshade in a pre-release screenshot. 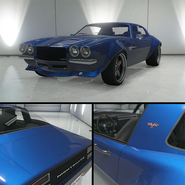 The Nightshade on Legendary Motorsport.

The Nightshade on the updated Rockstar Games Social Club.

The Nightshade in the cinematic preview on Rockstar Games Social Club.