The Weeny Nightmare Issi is a custom compact car featured in Grand Theft Auto Online as part of the Arena War update.

The vehicle is based on the custom 1964 Mini Cooper S, aka "The Mini", adopting an identical off-road modification and a similar roll cage.

The vehicle is essentially identical to its Apocalypse variant, but sports bright colors for the bodywork. The tyres, headlamp trimmings, engine air filter and spark plug wires are painted with the secondary colour, while the engine cover is painted with the primary.

The vehicle also sports permanent colors applied to random parts, which are the following;

The vehicle retains most of the properties from its base model, being a very nimble, agile vehicle. However, it has slightly lower acceleration due to the extra weight, but is compensated by its off-road capabilities, sorting out obstacles that its standard version often struggles on. Like the Issi Classic, it is powered by a very high-revving single-cam, transversely laid inline-4 with a mounted air filter and functioning timing belt.

Like various Arena vehicles, it can withstand a single explosive without being destroyed, though its size may cause the vehicle to get easily flipped by the knockback. It can be also upgraded with armour upgrades to partially protect the occupants with metal bars and window plates, but the side windows remain with no protection at all.

The Nightmare Issi can only be modified at an Arena Workshop. 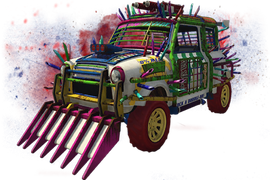 Modified example of the Nightmare Issi on the Arena War website.

The Arena Issi on Rockstar Games Social Club.
Add a photo to this gallery

Retrieved from "https://gta.fandom.com/wiki/Nightmare_Issi?oldid=1178634"
Community content is available under CC-BY-SA unless otherwise noted.