A first generation Nightblade in The Lost and Damned.

Standard White - 100%
Not to be confused with the Nightshade, a muscle car in Grand Theft Auto Online.
“A true biker’s bike, this power cruiser is a way of life boiled down to just the essentials. Black paint, a low growl, and a whole lot of smoke.”
— Career Builder description.
“It's amazing what a lick of dark paint and a chubby rear tire can do for a brand. Drop the hillbilly chic and suit up for some matte-black mistique. Ever heard of flogging a dark horse? You have now.”
— Southern San Andreas Super Autos description.

The Liberty Chop Shop/Western Motorcycle Company Nightblade is a cruiser motorcycle featured in The Lost and Damned and Grand Theft Auto Online as part of the Bikers update.

The Nightblade appears to be based on an Orange County Choppers 10th Anniversary or an older Harley Davidson Dyna Street Bob.

The bike is depicted with a rather long body, featuring a small front mudguard attached to the center of the wheel and telescopic forks, while the upper area features a circular headlight mounted on the lower clamp and two small turn signals on either side of the upper clamp. The handlebars are connected to the bike by dual support frames.

The main body features a single lower frame that splits into two frames below, a long fuel tank with chrome trim around the side panels, a rounded oil tank and a black leather seat that extends towards the rear fender and having a reinforced frame on the rear. The engine bay features a circular air filter and dual exhaust pipes on the right side, with the latter coming from each cylinder block and merging into one wide pipe, while the section below the oil tank features foot pegs for the passenger.

The rear section consist of a small fender with a single red light and license plate on the end, while the turn signals are mounted on a rigid frame connected to the red tail light and the end of the bike's main frame. The rear wheel is connected to a triangular frame and features the corresponding chain drive and sprocket on the left.

The primary color of the bike is applied on most of the bike's components, while the secondary color is applied on the side panels of the fuel tank. It uses a set of wire rims similar to the Freeway and wrapped in medium-profile tires, with the rear one being wider.

Like other similar bikes, there was a Beta version of it in Grand Theft Auto IV. It was mostly identical to the TLAD iteration, but the transmission cover had "Nightblade" badges on it and the handlebars were slightly different, with a single speedometer on the center.

The Nightblade returns in Grand Theft Auto Online with a complete redesign, inspired from the Harley Davidson Night Rod Special.

The Nightblade retains the generally long design, but assumes a more robust body. The front retains most of the features from the TLAD iteration, but the headlight is mounted on the upper clamp and lacks the turn signals on the sides, while the handlebars have sleek mirror wings.

The main body has tubular frames around the body, a dam spoiler in front of the engine bay and side covers located behind the triple clamps and below the fuel tank, while the engine bay has a single exhaust pipe on the right side, coming from the front cylinder block. Directly over the fuel tank area, there is a dial set derived from cars like the Schafter and the Tailgater, but rearranged in a way that the speedometer is on the center, the temperature gauge on the left and the fuel gauge on the right. WMC badges can be seen on either side of the fuel tank as well.

The rear area of the bike features a flat leather seat with white outlining around it, together with a long rear fender with a wide red brake tail light on the end. The rear wheel is connected by a black, dual-sided swingarm, supported by what looks like air suspension tubes on either side. The chain drive and sprocket are fully animated and feature a black covering above, while a small plate holder can be seen on the left, with the license plate and a small red main light above.

The primary color of the bike is applied on the main components, while the secondary color is applied on the frames. The wheels appear to be similar to the "Speedway" rims also available in Los Santos Customs, albeit with a permanent black finish and wrapped in high-profile tires, with the rear one being wider. The outer surrounding of the rims can also support a dedicated wheel color, which can be painted by selecting a custom rear wheel, applying a color and change back to the stock wheel (as it won't reset to the default alloy color). 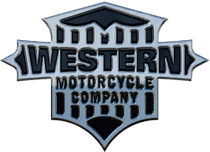 The Nightblade has above average top speed and acceleration, as well as acceptable braking. However, the heaviness of the bike and the long body often struggles to take corners and is unable to perform wheelies.

The Nightblade uses a chain-driven, V-twin internal combustion engine with a 5-speed manual transmission, as evidenced by the foot-actuated gear shifter. The engine emits a high-revving, odd-firing noise which sounds to be partially or fully unrestricted, identical to the Lycan.

The Nightblade performs well for its type. It has a relatively high top speed and good acceleration. Its handling is also nippy compared to other choppers. Its heavy weight does not significantly restrict its ability to maneuver, although it does stop the player form being able to perform wheelies. Its durability is weak against harsh collisions and landings after a jump as it can only take a couple of punishments before the bike starts billowing smoke and eventually catch fire and explode.

The bike is powered by a push-rod V-Twin engine and coupled to a 5-speed manual gearbox, evident by the foot-actuated shifter. The engine produces a distinctively low-revving, loud engine sound, slightly smother than the ones from most chopper bikes. 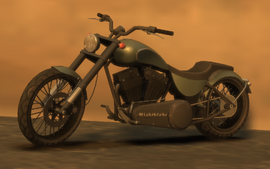 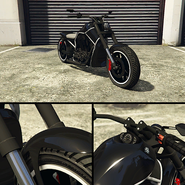 The Nightblade on the updated Rockstar Games Social Club.

The Nightblade in the cinematic preview on Rockstar Games Social Club.