Night Hog is a deceased character in the Grand Theft Auto series who is mentioned in The Lost and Damned. He is also honored on the main website of the Lost MC, Lostmc.com.

Night Hog was born in 1950 and was a resident of Liberty City and a member of The Lost MC.

In 1982, Night Hog was a part of a small confilct with some members of the rival Angels of Death MC gang. He was killed during the conflict, taking two shots to the head.

Night Hog was the first fatality in the fighting between the two gangs. 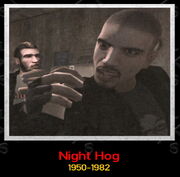 Retrieved from "https://gta.fandom.com/wiki/Night_Hog?oldid=1261320"
Community content is available under CC-BY-SA unless otherwise noted.