The Nevada is based on the vintage Douglas DC-3 passenger aircraft, and as such is one of the oldest aircraft in the Grand Theft Auto series. The Nevada is a large propeller passenger plane with two radial engines. Its access door is at the back and the plane always leans tilted nose up when parked. It possesses Juank Air decals, and can spawn in various color schemes.

The Nevada has a decent top speed, but it has a rather long take off distance and slow acceleration. The Nevada also has good durability; it can withstand one or two homing rockets before being destroyed. Keep in mind, though, that crashing into an obstacle head-on will immediately destroy the plane. Also, it can ram into helicopters such as the Maverick, Sea Sparrow, Police Maverick and News Chopper, but will take damage. 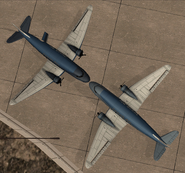 Viewed from above. One of the Nevadas has its door open.

A variant of red and grey paint scheme. The Nevada has its door open.