In-game time
For the character with the same nickname, see Ron Jakowski.
“Trevor and Ron intercept a weapons shipment.”
— GTA V description on Rockstar Games Social Club
“And they damaged my stuff. They smash up my home. Damage my soul. Look at this...This, this, this, this statue here of Impotent Rage. This fucking meant more to me than Johnny K meant to anyone! And they smashed it! Those pathetic, midlife crisis, hog-riding, shaven-headed, fruity leather-chap-wearing fucking assholes!”
— Trevor Philips

Nervous Ron is a mission in Grand Theft Auto V given to protagonist Trevor Philips by Ron Jakowski.

The mission begins with Trevor arriving at his trailer, to find Ron, who anxiously informs him that The Lost MC have ransacked the trailer. What angers him the most is that they've manage to break apart his Impotent Rage statue. Before Trevor can exact his revenge, he threatens Wade into quickly finding Michael Townley, which he has so far been unsuccessful in doing.

Outside the trailer, Trevor explains to Ron that two weapons planes will be landing at Sandy Shores Airfield later that day, with Trevor planning to "appropriate them". To prepare for this, Trevor and Ron take 2 Blazers and he rides to the local Ammu-Nation while Ron goes to the vantage point. Trevor threatens the store clerk into giving him a Sniper Rifle, a scope, and a suppressor all for free. After leaving the store, Trevor rides to meet Ron at a water tower to the north of the airfield. A few hours later, under cover of darkness, Ron makes his way towards the airfield whilst Trevor watches on through a sniper rifle. After Trevor kills any watching bikers, Ron plants a bomb on a gas tank at the airfield. A helicopter piloted by several enemies appears above and Ron warns Trevor to shoot it down, so they won't notice about the attack. Trevor shoots its pilot. A cutscene briefly plays when the pilotless chopper descends and eventually crashes.

Despite this, The Lost noticed the attack and prepared to launch a counterattack. As Ron prepares to escape in one of the planes, Trevor, instead of riding along with him, decides to hop onto the plane's wing on his stomach. While Ron is piloting the plane out of the hangar, Trevor fires at the members of the The Lost MC whilst laying on his stomach, back and side, killing enemies who can threaten Ron and his plane.

As Ron taxis further down the runway, Trevor leaps off the plane's wing and takes another plane. While taking off, Trevor hits two bikers, one flailing out from underneath the speeding plane, while the other leaps onto and grasps the wing as Trevor takes off, but Trevor quickly takes him out.

Ron leads Trevor over the ocean, where he encourages Trevor to fly low to avoid getting spotted by the military base. Both men drop their merchandise into some waiting boats before flying to a different airfield.

"The Blaine County Sheriff's office told reporters it was swamped and unable to cope following the recent outbreak of drug-related violence in the Senora Desert region and across Blaine County. Another violent incident yesterday saw a massive shootout between drug factions at Sandy Shores Airfield that left many dead and police confused. Police Spokesman Elmore Thickett told reporters "these violent incidents are becoming all too common in Blaine County. Sure, we've always had problems - this is a poor county - but the past few months have seen things get completely out of control. We don't know how to cope and are requesting help from the state. So far, they seen more interested in posing in movies than stopping folk up here from getting shot but that ain't nothing new." Experts are blaming the violence on a multi-sided turf war with participants trying to gain control of the cocaine trade from Mexico into Los Santos, as well as the methamphetamine trade most of which is manufactured locally before being sold overseas and across the country. As many as five major gangs may be involved in the trade. Some are seen as particularly deranged. The highly lucrative crystal methamphetamine trade seems to be headquartered in the towns around the Alamo Sea, while it is also believed several Mexican cartels also have a presence in the area. Police have attributed several recent massacres to an on-going turf war thought to involve four or five gangs from Los Santos and two or more local operations. Some recent shootouts have been so bloody, some local politicians are calling for increased firepower and have requested either military or paramilitary support to control recent events. Don Percival, CEO of Merry Weather has offered his company's services. Reports link several incidents to a particular local drug dealer police are desperately trying to identify. Police are appealing for calm, within reason. "We want people to panic but only in so far as it is useful" they told us."

"A deadly shootout at a local airport in Blaine County. Sandy Shores Airfield up in rural Blaine County resembled a warzone, as the ongoing drug war escalated in another bloody incident. Gangs battled to the death in a pattern of destruction that has become all too common in the area. Witnesses spoke of one particularly crazy lunatic, who police are trying to identify. As they believe he may be behind several of the recent acts of violence."

An Artwork of Trevor in the mission Nervous Ron. This can be seen sometimes when loading Story mode.

Trevor threatening Melvin to give him a Sniper Rifle, a scope, and a suppressor, all for free.

Trevor heading to the airfield.

A guard arriving in a Burrito.

Trevor taking out the helicopter.

Trevor heading to the hangar.

Trevor jumping on the wing of the Cuban 800.

Opening the bomb bay doors and performing the drop.

Trevor landing at the airfield.

Trevor and Ron assessing the day.

Notice about smuggling missions and the availability of the hangar 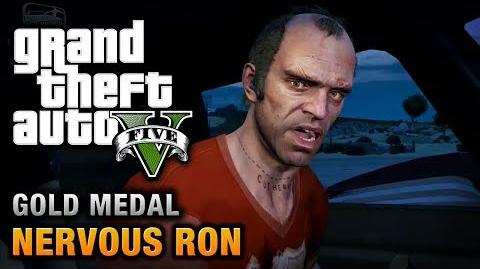 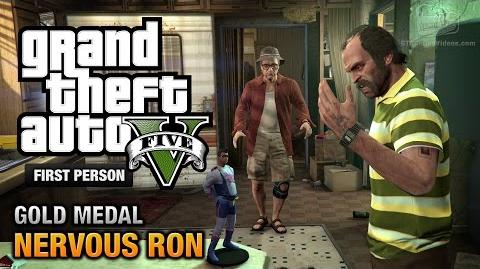 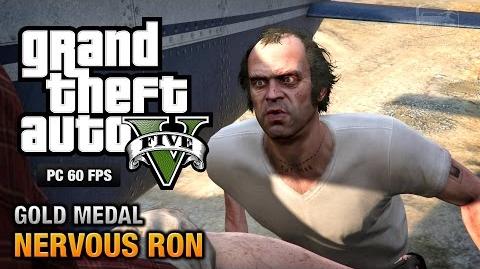