“Fresh from Truffade's undersea test track, the Nero is a god-emperor among supercars that'll dip its rivals in burning oil, seduce its mother and play the fiddle while the ozone burns. And if all the slack-jawed Adder owners aren't jealous enough already, Benny's deep-vented, mod-ready overhaul is going to have them driving their million-dollar golf buggies into the sea in despair.”
— Benny's Original Motor Works description.

The Truffade Nero is a hypercar featured in Grand Theft Auto Online as part of the Import/Export update, released on December 20th, 2016, during the Festive Surprise 2016 event.

The Nero, being a modernized version of the Adder, shares some of the styling cues from the aforementioned car, having a similar bulky profile and characteristic features. The front shares the grille and intake positioning from the Adder, but twin separations are seen over the intakes. The headlamp housings assume a similar positioning and shape from the Adder's, but use a set of square lamps with small light strips below. Chrome details can be seen on the intake separations, lower centre and grille surrounding, as well as a manufacturer emblem placed over the grille. The bonnet area is similar to the one on the Adder, and features a carbon-fibre panel in front of the windscreen.

The sides of the car assume a similar pattern to the Adder, featuring a curvature passing from the lower side and going up to the roof area. However, there is an angular line where the side vents are located, also finished in chrome. Carbon-fibre skirts are seen at the bottom, while rear-view mirror shells with chrome strips are seen on the cabin area, as well as black rear-quarter panels. A separation can be found at the rear like the Adder, but does not extend further down, as it passes directly above the engine. The Nero, like the T20, features an active spoiler.

The rear of the car features dual circular exhausts and a manufaturer emblem on the central panel, as well as carbon-fibre rear vents on the outer edges, surrounded by red light strips. The lower area is dominated by triangle-shaped vents on the edges, a trapezium-shaped vent on the centre and a black six-element diffuser, with a small reverse light centered on it. Its underside also uses a CFRP plate covering the entirety of the vehicle, exposing the section around the rear axle.

Its interior is very modernized, featuring a dashboard with two main analog dials and a digital display, two AC units on the center and two more at either side of the dashboard, as well as a Meinmacht radio display. The steering wheel features four buttons and two paddle shifts behind it, as well as the Truffade logo on the horn cap. The gear stick is very stilized and the seats have a sleek appearance, appearing to be some kind of race seats.

The car's main body, upper side and rear panel are painted in a primary colour, while the front bumper, part of the cabin, sides and rear are painted in a secondary colour. A trim colour is also available for its interior, mainly the panels, stitching and horn cap. Although not accessible, part of the engine covers are assigned with the "dial" colour, which is set to black in purchased examples. A set of seven-spoke rims with a manufacturer emblem on the black, bolted-on centre can be seen, wrapped in low-profile tyres. The rims can be also painted, although only those generated in the Content Creator may have a colour.

The Nero's performance is a significant improvement from the Adder, the previous Truffade hypercar, in that acceleration is very similar. The vehicle becomes heavier, however, but it helps on keeping its stability, as well as being rather tough to push, being an ideal choice for stunt races.

Although the engine is unclear to identify, it seems to emulate the Chiron's W16 engine. However, unlike the Adder's one, which is basically composed of two V8 covers, it uses its own texture, closely resembling the aforementioned engine and with the Truffade's logo embossed on each cam cover. Said engine is coupled to a 6-speed gearbox in a mid engine, all wheel drive (20% front, 80% rear) layout. Its engine sound is identical to the one from the Adder, albeit slightly louder. 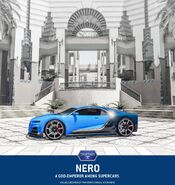 The active spoiler in action.

The active spoiler while braking.

The Nero on the updated Rockstar Games Social Club.

The Nero incorrectly placed in the cinematic preview of the Nero Custom on Social Club. 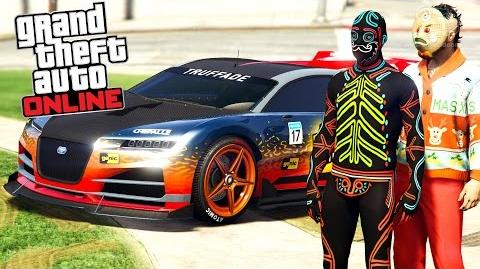