Standard White - 100%
Not to be confused with the Neo, a sports car in the same game.
“When the history of the electric car is written, it will begin with the Pfister Neon. Everything else - all the ridiculous eco-vans and hybrid fetishes - has been foreplay. Now Pfister have dropped their pants, and the battery-powered action can really begin.”
— Legendary Motorsport description.

The Pfister Neon is a four-door electric sports car featured in Grand Theft Auto Online as part of the The Doomsday Heist update, released on January 30th, 2018, during the Neon Week event.

The vehicle takes strong influences from the 2015 Porsche Mission E concept, which has since entered production as the Taycan. The front end is inspired by the Porsche 918 Spyder, while the rear end bears similarities to the second generation Porsche Panamera (971) and Porsche 911 (991.2), the latter whose taillights are used for the Neon.

The Neon is depicted with a traditional 4-door layout and sporty elements, where the front fascia features a carbon-fibre extender/splitter at the bottom, while the bumper area has a trapezium-shaped mesh intake on the centre and a large one that spans about the entirety of the car's width, with a narrower section above the central intake. On the upper area, the car has distinctive inset formations containing black housings, each one consisting of circular lamps and modern LED-like strips, with the three inner strips working as high-beam lamps. A set of dual vertical intakes can be seen beside the bumper intakes and the headlamps, while the bonnet area has two concave formations on the sides and the Pfister logo on the front.

The sides of the car make use of inset formations passing through the doors, fins near the front wheels and silver/chrome details on the front fenders and part of the front doors, while the lower areas have concave formations and carbon-fibre skirts, the latter bearing blue "PFISTER" badges below the rear doors and "RAPID CHARGER–E" near the front wheels. The greenhouse area has black trimmings around the windows and carbon-fibre supports on the front doors and near the A-pillars, holding body-coloured mirror shells.

The rear of the car is curved in appearance and bears modern light strips, with the upper one spanning the whole car's width and working as the main lamp, while the middle and lower ones occupy about one quarter of the car's width and work as the brake and main lamps, respectively. Within the tail lamp set, there is a black section with blue "PFISTER" badges on it, which is also illuminated when the vehicle’s lights are turned on. The middle area of the rear bumper has the corresponding section for the number plate and a distinctive shape for the bumper area, while the lower area is predominated by a diffuser that is mostly finished in carbon fibre and a rear exit vent, also housing a single reverse light at the bottom of the same vent.

The car's interior is the same used in the Nero, the Nero Custom and the XA-21, but uses the same dial set from the Raiden, using the corresponding "Kw" dial in place of the tachometer. The horn cap bears the Pfister logo.

The primary colour of the car is applied on the bodywork, the lower portions of the rear diffuser and the outer surrounding of the stock rims, while the secondary colour is applied on the mirror shells. Although not accessible, a trim colour is also available for the dashboard, horn cap, part of the doors, seats and overstitches. It shares the same rim design as the Osiris, being five dual silver/chrome spokes with a black centre, fitted with low-profile tyres. 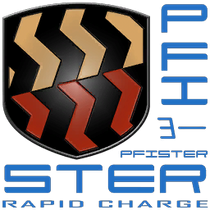 Contrary to some electric supercars, namely the Cyclone, the Neon possesses impressive traction, which, combined with its acceleration nature, can make the car competitive in certain racing tracks with the Feltzer and the Elegy RH8, despite the Pariah's total domination. In the meantime, its top speed is way down the list, being a close match with that of the Raiden, as can be predicted from an electric car. This major downside could prevent the Neon from coping huge gaps in Stunt Races, and thus not advised to be used.

Although its powerplant is not very clear due to the lack of details, the Neon uses a battery cell powering two motors, explaining the AWD layout with equal torque distribution (a layout similar to the real-life Taycan/Mission E). Like most electric cars, it has a quiet engine sound that is clearly heard in quiet areas with the radio off. 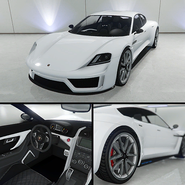 The Neon on Legendary Motorsport.

The Neon on the updated Rockstar Games Social Club.

The Neon in the cinematic preview on GTA Online Rockstar Games Social Club. 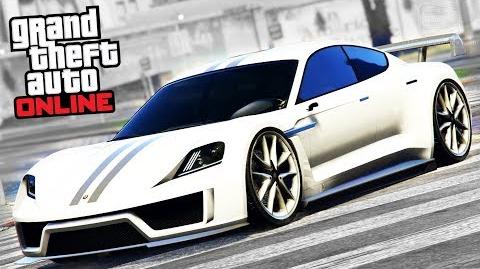