sportscar_6_eur_4cyl
Not to be confused with the Neon, an electric sports car, or the Nero, a hypercar in the same game.
“Vysser are the kind of small, artisanal manufacturer who are prepared to think outside the box. The design blueprints for the Neo drew their inspiration from the aerodynamics of a diving falcon, the composure of a ballet dancer, the curve of a suggestively raised eyebrow, and the assertiveness of a cluster bomb. This is the kind of pedigree you need.”
— Legendary Motorsport description.

The Vysser Neo is a sports car featured in Grand Theft Auto Online as part of the continuation of The Diamond Casino & Resort update, released on August 1, 2019, during the Neo Week event.

The vehicle appears to be based on the Spyker C8 Aileron, a street supercar. The rear lights are similar on the ones from the Maserati 3200 GT, except connected similarly to the 2015 VW XL Sport. The side skirts of the Neo bear resemblance to the Maserati GranTurismo. The front bumper, grille, hood and headlights seems to be inspired by the Kahn Vengeance.

The Neo is depicted with a rather aerodynamic design, where the front end features a small black splitter and an open section in the centre, while the area above houses a rounded mesh grille with black vertical elements in front of it and mesh side intakes intended to direct air flow to the front brakes. The upper edges of the car have black housings with circular headlamps that are encased in silver/chrome, as well as modern, LED-like light strips on the inner and upper sides of each housing. On the bonnet area, there are distinctive formations around the centre of the front compartment, which curve towards either side of the windscreen base, along with dual mesh intakes on the outer sides and the manufacturer emblem on the front. Said compartment opens to reveal a small luggage area, various riveted details on the side borders, numerous small intakes on the front area, and a carbon-fibre windscreen base, holding a single central wiper.

The sides of the car denote its aerodynamic profile, where the front fenders have distinctive formations starting from the front grille and curving towards the top of the wheel arches, before following the shape of the arches towards the bottom. The middle section consist of various body lines above the skirting area and upper side, the latter going towards the rear end of the car. The vehicle has black skirts, concave sections leading to a set of small intakes, and silver badges with the car's name on it, as well as inset portions for the door handles and key holes. The car makes use of scissor doors, which seem to rotate further away from the car's body in a similar manner to the Infernus (in contrast with most sports cars with similar door design). A set of amber marker lights can be seen on the rearmost portions of the rear fenders.

On the greenhouse area, the car features black trim around the windows and the sunroof, black B-pillars and coloured rear-view mirror shells near the A-pillars, which have dual support frames. Directly behind the cabin area, there are triangular rear-quarter windows and a large rear window that exposes the engine bay and the carbon-fibre sections beside it, while the rear section has an impressed area on the boot compartment that follows the shape of the black trim around the rear window, as well as a small lip spoiler at the end.

The rear end of the car features modern tail lamp strips, where the outer curved ones work as the main/brake lamps, while the central one work as a third brake lamp. These lamps do not have a defined separation and appear as a single unit, but the central one spans about half the car's width, and the edges align with the halves of the outer exhaust tubes. The area below the tail lamps is predominated by a black section with a mesh vent on the upper side, the dual exit, dual exhaust tubes on the hexagonal sections, the number plate and square reverse lamps on the lower area and a silver/chrome diffuser with an open section at the bottom. The manufacturer emblem can be seen below the central tail lamp, while the silver lettering can be seen embossed over the vented section. The underside of the car is mostly carbon-plated, with an elevated section on the front area and an exposed rear axle.

The interior of the car is shared with the Itali GTO, being a derivative of the one used in the Nero, the Nero Custom and the XA-21. It also reuses the same dial set, which is the same one found on the X80 Proto. The manufacturer logo can be seen on the horn cap and on the headrests, while the silver lettering is seen embossed on the passenger side, below the aircon unit.

The primary colour of the vehicle is applied on the bodywork and the rear-view mirrors, while the secondary one is applied on the surroundings of the door key holes and the portions of the greenhouse area that are not occupied by the black trim and windows. A trim colour is also available for the interior, being applied on the dashboard, the steering wheel, part of the doors, part of the seats, the surrounding of the gear shifter and the interior stitching. The rim design is unique, having six main spokes placed around the inner centre and three smaller ones between each main spoke, placed around the outer centre. It has low-profile tyres.

Performance-wise, the Neo is highly comparable with the Itali GTO, with 4WD output and high acceleration. It is much more stable on rough and uneven roads, however, and powerslides are kept short but controllable. Cornering is a little underwhelming in comparison to other high performance Sports Class cars. The top speed is great. Off-road, however, is far less recommended as it can slide out far too easily, often spinning itself out of control.

The Neo has two Advanced Flags enabled.[1] While the purpose of the second flag is yet unknown, the first flag increases the vehicle's suspension "springiness", causing it to bounce excessively while driving.

The vehicle is powered by a single-cam V8 engine and coupled to a 6-speed gearbox, powering all four wheels with equal torque distribution. It shares its engine sound with the Entity XF and the FMJ. 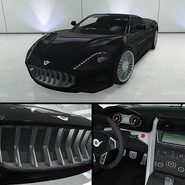 The Neo on Legendary Motorsport.

The Neo on the updated Rockstar Games Social Club.

The Neo in the cinematic preview on GTA Online Rockstar Games Social Club. 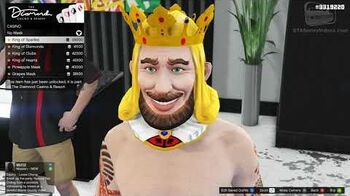