Yes
“Super fast, super unshielded. When you're riding a Nemesis, you don't just feel the wind in your hair, you feel it tearing into the back of your eye sockets.”
— Southern San Andreas Super Autos description.

The Nemesis appears to be based on the Ducati Monster and the Ducati Hypermotard, with elements from an Aprilia Shiver and a front fairing similar to the KTM 690 Duke.

The Nemesis assumes a similar profile to motorcycles such as the PCJ-600 and the Vader, where the front section features a small CFRP mudguard attached to the centre of the wheel and chrome fork legs over black fork tubes, while the upper area has chrome triple clamps and additional chrome frames holding a small fairing with a single headlight and a small visor, as well as two indicators on the outer side of each frame. The upper clamp/plate holds two independent handlebars with small mirror wings and a single central instrument panel, where in the enhanced version, uses the same "Sports Bike" dial set also shared with the aforementioned bikes.

The main body is rather basic and features body panels and protective frames on the upper area, while the fuel tank is slimmer in appearance and bears "NEMESIS" markings on either side. The engine bay has the corresponding radiator on the front and two exhaust pipes on either cylinder block.

The rear section has a black seat with room for two occupants, a red tail lamp on the rear end and a short plate holder below, with the corresponding license plate and the turn signals. The rear wheel is connected to the vehicle by a dual-sided swing-arm finished in chrome, having a CFRP mudguard, a single suspension spring and two side frames holding the foot pegs for both occupants. The exhaust tubes are seen on either side of the wheel and are finished in carbon fibre, while the chain drive and sprocket are seen on the left.

The primary colour of the bike is applied on the front fairing, mirrors, fuel tank, protective frames and rear, while the secondary colour is applied on the side markings. It has split six-spoke rims similar to the "Speedway" rims available in Los Santos Customs, with the rear wheel being wider.

Being a dual-sport bike, the Nemesis has above-average performance compared to other bikes, as it does not handle as well as a sports-bike, especially when it comes to stability in the corners. However, its acceleration places it above similar bikes such as the PCJ-600 or Vader, and has a better top speed than both. Its cornering radius is tight without being excessively touchy, making for a smooth ride. Off-road performance is also excellent, with a thin design and high center of gravity, providing a controllable ride. Crash deformation is average among motorcycles.

The bike is powered by a V-Twin engine, evidenced by the exhaust manifolds present on each cylinder block, coupled to a 5-speed gearbox. The engine sound is shared with the PCJ-600 and the Vader, being a high-pitched variation of the one used in the Sanchez. 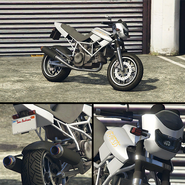 The Nemesis on the updated Rockstar Games Social Club.

The Nemesis in the cinematic preview on GTA V Rockstar Games Social Club.

The Nemesis in the cinematic preview on GTA Online Rockstar Games Social Club.

The Nemesis is a notably rare vehicle, and does not appear in traffic as often as other vehicles. However, it can be found in the following locations: