Standard White - 100%
For the 4-door Nebula featured in Grand Theft Auto San Andreas, see Nebula.
“We know what you're thinking. Another mid-seventies brick. But think about it for a moment. A brick is only slow if you don't throw it right. And does a hollowed-out, turbo-charged brick really sound like it's that difficult to throw? That's the spirit. Batter up.”
— Southern San Andreas Super Autos description.

The Vulcar Nebula Turbo is a 2-door sedan featured in Grand Theft Auto Online as part of the continuation of The Diamond Casino & Resort update, released on August 22, 2019, during the Nebula Turbo Week event.

The Nebula Turbo takes the appearance of the first generation Volvo 242 2-door sedan, specifically the 242 GT.

The design of the car is boxy and traditional, where the front end is predominated by the bulky bumper with a lower splitter, square fog lamps and license plate. The upper area is occupied by a black grille bearing two circular fog lamps and the manufacturer emblem in the centre, along with a "turbo" badge below the passenger-side foglamp. Besides the grille there are two circular main lamps and rectangular turn signals located in black housings and surrounded by black trim. The bonnet is mostly flat and features a large intake near the windscreen.

The sides of the car feature a detail running through the whole car and passing through the doors, while the fenders have a flared shape and a set of black mudguards. The cabin area makes use of plastic trim around the windows, as well as a windscreen banner and black mirror wings. The same "turbo" badge can be seen on the front fenders.

The rear of the car features another bulky bumper with overriders, while the upper area features a set of rectangular tail lamps and a section for the license plate. The boot is flat in appearance and bears the corresponding badges displaying the manufacturer and name, including the "turbo" badge. On the passenger side, a single exhaust tube can be seen, just below the bumper.

The interior and dials are shared with the Blista Compact, which are a variation of the ones found inside the Futo. However, the steering wheel bears the corresponding manufacturer emblem in the centre.

The primary colour of the car is applied on the body, while the secondary one is applied on the roof, pillars, sunstrip and bumper ridges. It has unique rims with small spokes around the dish, with "VULCAR RACING" markings over them.

The Nebula Turbo is an underperforming car in its class; it could be compared with the Futo in terms of launch time and traction, but feels much heavier and has longer stop times. The top speed is relatively average for its style, but given its class as a Sports Classics vehicle, is somewhat lackluster given some of the other higher-end choices within this class, making its use within straight-line racing in this category substandard. Traction suffers a lot regarding the unfamiliar weight, and the suspension has a lot to be desired from no upgrades and Lowered Suspension upgrades, thanks to one of the advanced flags increasing the bounciness of the suspension, making the car rock about and, in turn, difficult to steer. Similar to some cars added with the Arena War update, the vehicle has an unsymmetrical toe value (see Bugs/Glitches), causing its steering to veer off towards the left, making the car somewhat difficult to drive for the first time.

The Nebula Turbo has two Advanced Flags enabled.[1] While the purpose of the second flag is yet unknown, the first flag increases the vehicle's suspension "springiness", causing it to bounce excessively while driving.

The vehicle is relatively heavy for its body size; with a lateral mass of 1320 kg, it is still vulnerable to larger vehicles and is incapable of ramming other vehicles off the road, but in contrast, is not easily threatened by other, similar sized vehicles.

The Nebula Turbo is powered by a 4-cylinder engine coupled to a 4-speed gearbox, powering the rear wheels. It is stated by name, website and badging to be turbocharged, yet there is no model or sound to actually support this unless the Turbo modification is applied, in which case, a turbo dump valve sound will be applied, as with any other vehicle. The last four "Hood" modifications allow the car to have one or two turbochargers (with the last one switching to a single-cam V8 engine), but do not improve performance in any way. The engine sound is relatively low-revving and loud. 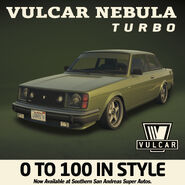 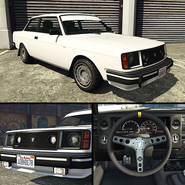 The Nebula Turbo on the updated Rockstar Games Social Club.

The Nebula Turbo in the cinematic preview on Rockstar Games Social Club. 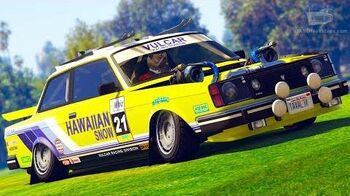