The NOOSE is based on the U.S. Department of Homeland Security (DHS) and Special Weapons And Tactics (SWAT) teams. It replaces the SWAT from previous games.

The NOOSE is called upon to assist the police when the player has a wanted level of at least three stars or four stars in single-player and in any multiplayer mode (excluding Cops n' Crooks). There are two known divisions:

In Multiplayer, NOOSE is the main rival force during Hangman's NOOSE, in which players must escort Kenny Petrovic from the Francis International Airport to Charge Island.

During one of The Lost and Damned's Multiplayer game mode known as Witness Protection, a team of players take charge of the NOOSE Team to protect (and escort) the Prison Bus and its occupants to a few police stations in Liberty City. This game mode is the only time players work for the NOOSE Team (as the NOOSE Team normally attacks players in almost all of their appearances).

NOOSE Tactical Response Units are deployed when the player has a three-star wanted level, they chase the player in Enforcers.

The NOOSE returns in Grand Theft Auto V with their own headquarters. Unlike in GTA IV, they do not have a defined division, but they are always TRU units. They begin to assist the LSPD when the player has a wanted level of three stars and above.

On ground, NOOSE agents are dispatched in FIB Grangers (in Los Santos) or Sheriff SUVs (in Blaine County), with two agents hanging off the side of the SUV and using their pistols to shoot the player at four stars. If the player barricades himself in a building, or tight cover, the TRU agents will begin to use Tear Gas to force them out; they also use gas on streets, and in open spaces.

In the air, NOOSE agents will begin to appear in Police Maverick helicopters that will be sent after the player at three stars (they will shoot at the player using Carbine Rifles), and at four stars, some helicopters may carry four NOOSE members who will rappel down to the ground, or the helicopter may land and they will get out on the ground.

All NOOSE members wear balaclavas, goggles and tactical helmets, along with blue and black uniforms in addition to their ballistic armor. They are usually African-American, Hispanic, or Caucasian. 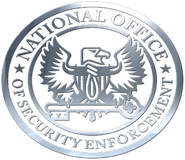 NOOSE logo as seen outside the headquarters in GTA V.

A NOOSE team responding to a bank robbery.

TRU agents during a raid in GTA V.

A pair of NOOSE officers.

A NOOSE and LSPD officer.

A NOOSE officer taking cover behind a trash can.

NOOSE TRU's in pursuit.
Add a photo to this gallery

NOOSE use a variety of modified vehicles throughout the series. The majority of their vehicles use a generic black or tan/grey color, with the exception of the NOOSE Cruiser and NOOSE Patriot, which possess a Patriotism and Immigration Authority livery, distinguished by green and blue stripes.

Annihilator
Add a photo to this gallery

Rhino
Add a photo to this gallery

Police Maverick
Add a photo to this gallery

Rocket Launcher (Corner Kids only)
Add a photo to this gallery

Micro SMG
Add a photo to this gallery

Combat Pistol (The Bureau Raid only)

LSIA branch in Los Santos.
Add a photo to this gallery 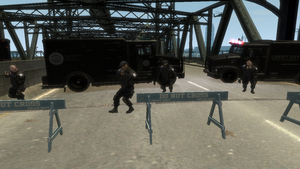 Retrieved from "https://gta.fandom.com/wiki/National_Office_of_Security_Enforcement?oldid=1187669"
Community content is available under CC-BY-SA unless otherwise noted.