The NRG 900 is a sport bike which inherits the general design and role previously filled by the PCJ-600 in the 3D Universe (considering that the HD era's PCJ-600 is now redesigned into a streetfighter, rather than a sport bike). The name suggests a connection to the NRG-500 racing bike from Grand Theft Auto: San Andreas; possibly that the NRG 900 is a modernized, commercial version of the NRG-500.

The NRG 900 is mostly based on the Suzuki GSX-R series. Depending of the version, the F variant has a similar front end to the early 2000's GSX-R750 models, while the RR variant is closely based on more recent GSX-R1000 models.

The NRG 900 is the only series of superbikes in Grand Theft Auto IV, and is available in two variants: The NRG 900F and the NRG 900RR. Cosmetic differences between the bikes are apparent, as the F variant is intended for casual use, having a license plate, turning signals and bar for a passenger to grab onto, while the RR variant is significantly sportier, with fewer accessories and a more aggressive styling.

The NRG 900 returns in Grand Theft Auto: Chinatown Wars, although this time assumes the design of the F model from GTA IV. Still, the NRG 900 is the only sportsbike featured in the game. 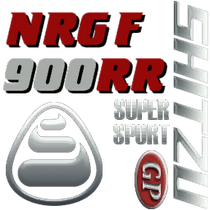 The NRG 900 is the fastest bike in Grand Theft Auto IV, but is outpaced by the newer bikes introduced in The Lost and Damned. Both variants excel at stunts and tricks; they are, however, difficult to control due to the brutal power distribution and massive torque at higher revs. According to the dashboard and gauge units, the bike revs up to 10,000 revolutions, and the speedometer reads up to 200 mph. Its handling characteristic is better suited to circuit use than public road use. It also possesses poor durability. The NRG 900 also features one of the heaviest bodies of the HD Universe sportbikes, which reduces the ability of characters to lift the bikes and perform wheelies and stoppies.

Bother NRG 900's sport single cam 4 cylinder engines, which is evident by the 4 outlets on the exhaust manifold. The exhaust system runs in a 4-1 outlet style. The "900" on its name possibly refers to its engine displacement. 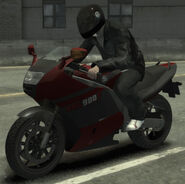 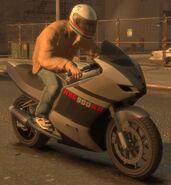 An NRG 900 in a pre-release GTA IV trailer, depicting an NRG 900F with an NRG 900RR badge, a different stripe on the body, and a later omitted "Shitzu" text on the underside.

A requested variant of the NRG900 in Stevie's Car Thefts in GTA IV.