GTA Wiki
Register
Don't have an account?
Sign In
Advertisement
in: Missions in GTA San Andreas, Side Missions
English

In the dry dock after collecting a corona worth 10 seconds.

Collect all checkpoints within the time limit.

Wasted
Inability to collect all checkpoints in time

In-game time
The NRG-500 Challenge is a side mission in Grand Theft Auto: San Andreas. The mission is started by entering a parked NRG-500 at a dry dock in Easter Basin, San Fierro. The goal is to collect 18 floating coronas around the dry dock before the countdown timer runs out of time. The countdown timer starts at 10 seconds when the cutscene ends. Each corona will add 10 seconds to the timer. The reward for completing this mission is $1,000 and a step closer to 100%.

If Carl fails the challenge (either by running out of time, staying off the bike for too long after falling off, destroying the bike through damage or jumping into the water) he can try again once another NRG-500 spawns by the dry dock. Alternatively, after the completion or failure of the challenge, the player can keep the motorcycle on their own.

The playing field of the challenge.

It is possible to disable the timer by simply passing through a corona at the very last moment before the mission failure message appears. After that, the timer will disappear and give the player infinite time to complete this side mission. If the player falls off the bike, the 30-second rule to remount still applies, but the glitch itself will still be active.

Another glitch is that if the player has failed the challenge but still has the bike, instead of leaving Easter Basin in order for the bike to respawn, they can park it again exactly where it normally spawns, get off, and then get on it again and the challenge will start again. This doesn't seem to work for the mobile ports of the game, however. 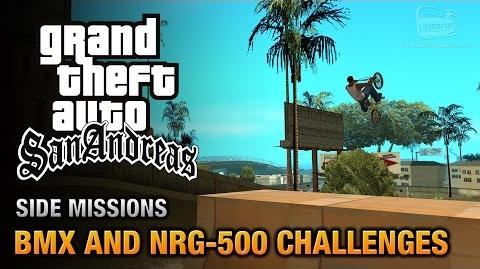