Conditional
The Mammoth NOOSE Patriot is the NOOSE version of the Patriot SUV in Grand Theft Auto IV.

The NOOSE Patriot is essentially based on the Patriot SUV (which in turn is based on a Hummer H2), but is equipped with an LED light-bar, the NOOSE livery and wheels with sturdier black rims and tires. Like other law enforcement vehicles, it cannot be repaired at the Pay 'n' Spray or taken through a Car Wash.

Like the NOOSE Cruiser and unlike Police Cruiser's/Patrol's V-bar, the NOOSE Patriot is equipped with a LED light bar does not make a distorted sound after being crushed or shot at with a weapon.

Strangely, being a vehicle clearly made to ram other cars it doesn't feature a front bull-bar. Also in the interior there is not any police equipment found in normal police sedans.

The paint scheme is loosely based on U.S. Department of Homeland Security vehicles, specifically an amalgamation of the Border Patrol and Transportation Security Administration/Federal Protective Service Police liveries. 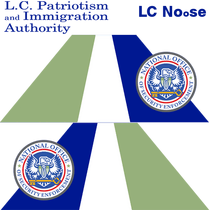 The NOOSE Patriot is much faster and has better handling than the civilian Patriot, while retaining its heavy weight and good ramming capabilities from the stock Patriot. Its elevated cabin and narrow windshield make shooting out the driver very difficult. The raised ground clearance, however, allows an easy shot at the tires as do the higher profile tires, as opposed to the low profile tires on the civilian Patriot.

Along with the great performance, the handling is equally improved. Instead of being down and heavy like the normal Patriot, the handling feels like the car is lighter. However, along with being very fast, if you steer too much, one of the front wheels can lift off the ground and make it prone to rolling over making high speed travel extremely dangerous. So you'd want to take it easy in the corners when driving the car.

Also like the regular Patriot, the NOOSE Patriot's bulky nature ensures that the player can easily overturn almost any small vehicle when plowing in its side.

The vehicle is powered by what appears to be the engine cover of a typical V8. The engine is laid transversely, in a front-engine, all wheel drive configuration. The engine gives the vehicle a huge amount of power, making the vehicle take good work of hills and other obstacles.