GTA Wiki
Register
Don't have an account?
Sign In
Advertisement
in: Vehicles, Vehicles in GTA IV, Police,
and 5 more
English

The NOOSE Cruiser is a variant of the Police Cruiser provided by the National Office of Security Enforcement and used by the Liberty City Police Department. The vehicle has been customized to fit the standards of the NOOSE vehicles.

The NOOSE Cruiser's livery is loosely based on the livery of U.S. Department of Homeland Security vehicles, specifically an amalgamation of the Border Patrol and Transportation Security Administration/Federal Protective Service Police liveries.

For unknown reasons, despite being a NOOSE-issued vehicle, only regular police officers occupy it.

When compared to the standard LCPD Cruiser, the NOOSE variant boasts an array of upgrades. Its' engine and gearbox are significantly upgraded, and gives it much better acceleration and top speed. Its' suspensions are stiffened slightly, improving its' cornering abilities, howerver sometimes causing fishtailing and spinouts. The brakes have been improved, allowing the vehicle to keep its' speed and brake later into a turn than a similar LCPD Cruiser. Overall, the vehicle is significantly better, capable of chasing down much more performance-oriented vehicles such as the Coquette and Banshee.

The NOOSE Crusier's most interesting improvement is its unique differential braking system. When braking and turning at once, the inside wheels of the turn will receive significantly more brake pressure than the outside wheels, almost always locking them. This helps to significantly reduce the sluggishness one would expect from such a heavy chassis, and improves turn radius, allowing corners to be taken at higher speeds. 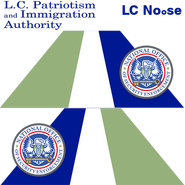 NOOSE livery appearing on the vehicle, shared with the NOOSE Patriot.