• ­The plane is all loaded up and ready to go.

• ­Above radar limit! (A sudden warning message appearing if the player flies the Rustler up to the radar limit, and the Visibility bar starts to rise)

• ­Fly into the corona to trigger the drop.

• ­Return to the airfield and land.

• ­Bring the plane to a stop anywhere on the landing strip.

"We got a problem. I got some guys out in the field need some equipment. If they don't get it, they'll be dead by nightfall."
— Mike Toreno explaining the mission to Carl Johnson

Carl arrives at the airstrip. While he is waiting for Toreno, Toreno sneaks up behind Carl and grabs him in a chokehold. After Toreno lets Carl go and tells him to "wake up and smell the coffee", he explains that his agents are in trouble and they need some equipment delivered to them; the agents need the package by nightfall otherwise they will all be dead. Carl, after a little reluctance and confusion regarding the situation, proceeds to the task.

Carl gets in a Rustler with the package attached to the fuselage. Carl takes off, with Toreno reminding Carl stay under the radar so that he will not be detected. Carl flies across the state to Angel Pine. He releases the contraband at a drop-off point and makes his way back to Verdant Meadows, again while flying below the radar. Carl arrives at the airstrip, with Toreno congratulating him for a job well done.

Carl Johnson about to arrive at the drop off point in Angel Pine.
Add a photo to this gallery 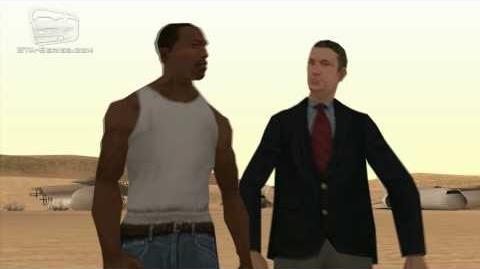 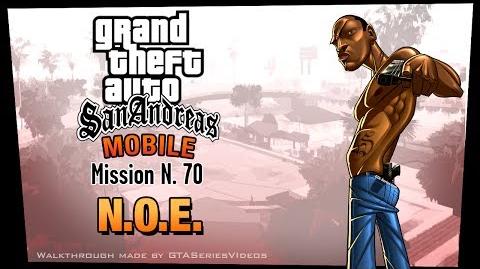 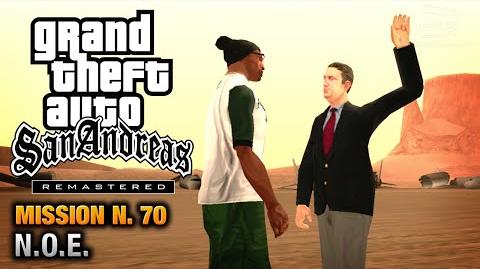 Retrieved from "https://gta.fandom.com/wiki/N.O.E.?oldid=1320311"
Community content is available under CC-BY-SA unless otherwise noted.