Wikipedia has an article on:
Musket

“Armed with nothing but muskets and a superiority complex, the Brits took over half the world. Own the gun that built an Empire.”

The Musket resembles a typical flintlock-based musket of the 19th century, but also closely resembles British Brown Bess muskets that were used by the Americans and Great Britain during the Revolutionary War, except it has a curved stock.

The top of the barrel is engraved with the word Edinburgh, possibly indicating the place of manufacture rather than a makers' name.

Shots have over-penetration, meaning the musket ball will continue its way after going through a first target. One musket shot can kill up to four NPCs if enough are in line with the bullet's trajectory. The musket can kill most NPCs in one shot. Due to its relatively large caliber, the musket is capable of leaving a severe, bloody wound on the victim when shot.

Damage per shot and range are almost equal to that of the Heavy Sniper: two shots in a helicopter's tail rotor is enough to destroy it, and one shot in the chest is enough to kill players until level 39 (approximately), while the Heavy Sniper kills in one shot until level 99. However, the player becomes vulnerable while reloading the weapon, since the wielder will take a lengthy reload time of 4.5 seconds, enough to be taken down during a heavy gunfight.

Like sniper rifles, two shots to a car's engine or fuel tank is enough to damage them and set it on fire, after which it will explode within a few seconds. 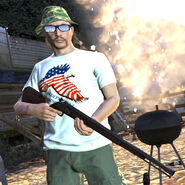 A player holding the Musket.

Edinburgh marked on the barrel.