Standard White - 100%
“A medium-sized delivery truck for your Nightclub Warehouse, with the potential to undergo frighteningly dangerous and almost certainly illegal modifications in a Weaponized Vehicle Workshop.”
— Career Builder description.
“Abandon your prejudices. This is not a delivery truck. It's a blank canvas. Somewhere you can create a thundering juggernaut of modern urban warfare, spitting missiles, machine gun fire, proximity mines and grenades at every turn, covered in near-impregnable armor, the terrifying spearhead of your new business empire. Cup holders not included.
Please note: this vehicle can be stored and modified exclusively in your nightclub warehouse.
”
— Warstock Cache & Carry description.

The Maibatsu Mule Custom is a custom light truck featured in Grand Theft Auto Online as part of the After Hours update.

The vehicle is a modifiable variant of the Mule, sharing the same profile and layout. The truck is based upon the "heist" variant of the regular Mule introduced in the Heists Update, but the grille separations appear to be finished in chrome. It also has side steps and handles on each side of the cargo box, intended for two additional players to hang onto the sides, in a similar manner to vehicles such as the Brickade and the RCV. The vehicle can also be modified with an array of visual modifications, being armor plates, liveries and respray colors.

The vehicle only has access to a primary color for the cabin and the box, and it has the same industrial wheels as the regular Mule.

The vehicle can be equipped with either two front-facing machine guns or two unguided missile launchers, as well as a remote grenade launcher identical to the one from the TM-02 Khanjali.

The Mule Custom is, as expected from a large box truck, relatively slow on the throttle and has poor brakes, but, like the original heist Mule and the Pounder Custom, makes up for its ability to ram vehicles out of the way. While not as powerful as the Pounder Custom or better, the Brickade, against other cars, the truck can be upgraded with a front scoop, which slightly increases its ability to part traffic.

Like the regular Mule, the Mule Custom has a 3-litre diesel engine, according to the badges and rear-wheel drive, as indicated in the handling files and in-game. The truck does not include a visible engine model, however. Its sound is somewhat similar to a diesel, high-revving engine with a significantly smooth engine sound, shared with the regular Mule, the Benson and the Stockade. The truck has Four Wheel Rotation System badges, suggesting it uses differential devices or transmission system.

Despite having three different levels of armor upgrades, none of them make the truck any more durable in free roam, as the truck will still explode with only a single explosive near the body, unless the player is in a Sell Goods mission, in which it gains increased resistance and immunity to missile lock-ons. However, the cabin also has bullet-resistant windows similar to vehicles like the Schafter V12 (Armored) and the Baller LE (Armored), giving the occupants slight protection against most firearms before being shattered.

It should be noted that while the Heavy Armor Plating upgrade adds plates that constrict the openings in the windows, they do not offer additional protection at all. In addition, adding any Armor Plating will take away the ability for occupants to use throwable weapons.

The Mule Custom can be modified with an array of weapons, separated into primary (driver-operated) and secondary (passenger-operated):

The Mule Custom can only be modified at the Vehicle Workshop inside a Nightclub.

* Denotes items that can only be unlocked for purchase via Research in the Bunker property.
** Vehicle is limited to Bulletproof Tires and Tire Smokes.

Close-up of the side steps.

The Mule Custom on the updated Rockstar Games Social Club.

The Mule Custom in the cinematic preview on Rockstar Games Social Club. 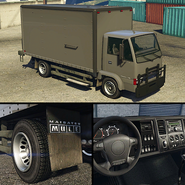 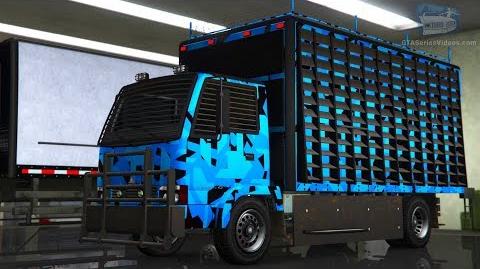