Mrs. Thornhill is a British tourist in Los Santos, who appears in the Vinewood Souvenirs missions along with her companion Nigel, she is obsessed with Vinewood celebrities and spends her time in Los Santos stalking several of them and stealing some of their possessions to add to her collection. Acording to Nigel, Mrs. Thornhill is married and has two children back in England, but she's rarely seen them since both of them began their souvenir hunt.

Nigel and Mrs. Thornhill request that Trevor steal various celebrity souvernirs for them, including the collar from Kerry McIntosh's dog, a golden tooth belonging to Willie from Love Fist, Mark Fostenburg's golf club and Tyler Dixon's swimming trunks. Over the course of these missions, Trevor assaults the various celebrities to obtain the requested items and even goes as far as killing Mark Fostenburg.

After retrieving the items, Trevor meets up once more with Nigel and Mrs. Thornhill to deliver the souvenirs. During the meeting, the couple spot their favourite action star, Al Di Napoli, and ask Trevor to help them get him to a "private interview" they'd set-up in an abandoned garage. Trevor takes Nigel and Mrs. Thornhill on a high-speed car chase after Di Napoli, who ultimately crashes his car and gets kidnapped by the elderly stalkers.

After holding him captive for a few days, Nigel and Mrs. Thornhill decide they can't keep Al locked up any more, since he refuses to eat and they fear he'll starve. The elderly Britons ask Trevor what they can do, and he suggests to either release him somewhere in the countryside where they can get away before he can contact anyone or "sending him on a trip he can't come back from". Since they are, as Nigel himself puts it, "not very good with goodbyes", they ask Trevor to take care of Al and then send him away, completely oblivious to what Trevor actually meant.

The player then gets to choose whether they kill Al by parking the car he's stuck in on the train tracks or drive out to the countryside and let him go. Either way, Nigel and Mrs. Thornhill make no further appearances in the game and it is clear that they were able to get away with the kidnapping and that they will continue to harass Vinewood celebrities. 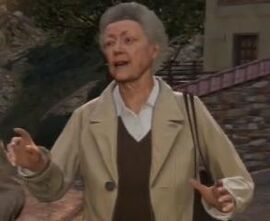 Retrieved from "https://gta.fandom.com/wiki/Mrs._Thornhill?oldid=1176595"
Community content is available under CC-BY-SA unless otherwise noted.