In-game time
For the character, see Mrs. Philips.
“So you never wrote to me... You never visited... I bet you never found a girl!”
— Mrs. Philips

Mrs. Philips and Damaged Goods are two Strangers and Freaks side missions in Grand Theft Auto V, given to protagonist Trevor Philips by his mother, Mrs. Philips, who makes her only appearance in the game.

For these missions to appear, the storyline will have to be completed with Trevor left alive, which means completing either The Time's Come or The Third Way. This will allow the "?" icon to appear at his trailer just after the end credits finish. Upon arrival, Trevor will storm in the front door, shocked to find his mother waiting inside. After an emotional conversation with her, she will say she has no insurance and is in pain, and that she needs Deludamol, to which Trevor will pick himself up from the floor and try to leave immediately so he can get her the drug. On his way out, she tells him to find a "truck load" of 1000mg doses for her. After the encounter ends, Trevor will stomp out of the trailer upset, and the mission Mrs. Philips will end, allowing the player to search for the van passively.

A Deludamol Rumpo (which is a van, despite Mrs. Philips wanting a truck load) can always be found parked out front of every hospital and pharmacy. As the player enters the van, the mission Damaged Goods begins, and they will have to deliver the van back to the trailer. When the player returns, the cutscene will show that Trevor's mother has disappeared, to which he becomes upset, lays on the floor in a fetal position, and cries. Ron also vanishes from the porch in between "Mrs. Phillips" and "Damaged Goods" and if the player instantly switches back to Trevor from Franklin, they see him binge drinking, and when he leaves the trailer Ron reappears. Completing the mission will then switch characters from Trevor to Franklin.

Until Trevor delivers a Deludamol van to the trailer, he will be unable to access his trailer.

Note: the van may not immediately spawn after the mission begins. It may be necessary to explore for a while, or switch characters, before the van begins spawning.

Location of Trevor's Trailer on the map.

Heading to his trailer in the Rumpo.

Arriving at the trailer.

Looking for "his mom".

Trevor has a breakdown.

Spawning as Franklin after the mission. 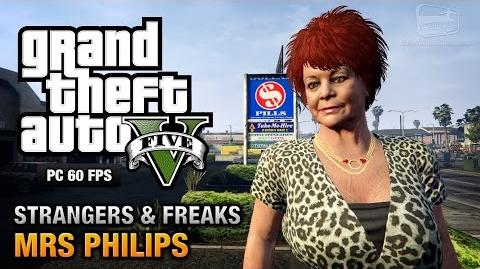