"I don't want your Goddamn money! Is that what you think I am? A prostitute? Still? You're sick!"
―Mrs. Philips to Trevor Philips in Mrs. Philips

She is the mother of Trevor Philips and appears in a Strangers and Freaks side mission.

Mrs. Philips is the mother of Trevor and Ryan Philips, the latter of whom died at some point before 2013. She was once a prostitute and stripper. It is implied in the game that Mrs. Philips was both abusive and neglectful towards Trevor, rarely paying attention to him and verbally chastising and demeaning him on the rare occasions when she did.

She mentions that Trevor never wrote or visited her during her stay in prison, much to her disappointment.

The only appearance she makes is during the Strangers and Freaks mission Mrs. Philips after completing the storyline, if Trevor is kept alive. When Trevor walks into his trailer, he suddenly encounters an older woman in his trailer, much to his shock. When asking her what she's doing in his trailer, she turns around and faces him, asking Trevor, "Is this how you greet your mother, Trevor?" She appears to be the mother of Trevor, who (as far as is known) just got released from prison. She's disappointed in her son because he never wrote to or visited her, and asks him if he found a woman yet. Not letting him answer the question, she asks if he's gay, which she would have no problem with, as she states she would've always wanted a gay son; a son that wouldn't forget about his mother.

After Trevor deeply apologizes to her, she states she is in great pain and requires a drug called Deludamol, a whole truckload of it. When Trevor is about to walk outside, Mrs. Philips mentions to bring her a gentleman as well if he finds one, stating Trevor could really use a father figure. To complete the mission, Trevor must find a Deludamol Rumpo (which, despite Mrs. Philips' request for a truckload of the medication, is actually a van). Once the van has been found and brought back to the trailer, it appears Mrs. Philips has disappeared, and is nowhere to be found, which leads to Trevor crying on the floor. Following this, Mrs. Philips makes no further appearances.

Mrs. Philips looks like she could be in her late 60s-70s and has short red hair. She wears a leopard printed shirt with a big black belt around her belly and pink leggings. She also wears multiple accessories like a chain, earrings and bracelets. She bears a noticeable resemblance to Peggy Bundy from Married With Children, as both wear similar clothing and have red hair.

Mrs Philips as she appears in the Strangers and Freaks Mission. 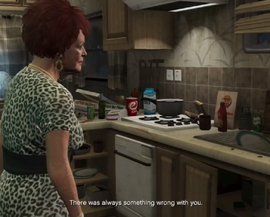 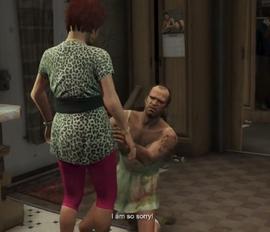 Trevor crying at his mother.

Retrieved from "https://gta.fandom.com/wiki/Mrs._Philips?oldid=1244505"
Community content is available under CC-BY-SA unless otherwise noted.