If the Price is Right ("Deal")
A Dish Served Cold ("Revenge")

A Revenger's Tragedy ("Deal")
Out of Commission ("Revenge")

Priest: "I now pronounce you husband and wife, you may kiss the bride."
Mallorie: "Mwah!"
Roman: "Yes!"
Priest: "Wonderful, wonderful..."
Roman: "Ah man, yes I did it!"
—Roman and Mallorie during their wedding ceremony at the church.

Mr and Mrs Bellic is the penultimate storyline mission in Grand Theft Auto IV, given to Niko Bellic by his cousin Roman.

Regardless of what choice did the player made beforehand, Roman will call Niko a day before his wedding. He will tell Niko to get some sleep and be at the church next day at 10 am.

This is the only mission common to both endings of the game. The mission consists purely of a cutscene depicting Roman's wedding to Mallorie Bardas -- the end of the scene, however, depends on which decision the player took in the previous mission.

If the player chooses the "Deal" ending, Kate McReary becomes upset with Niko for making a deal with Dimitri Rascalov, and refuses to go to the wedding. Roman, however, is happy that Niko did the deal and put his hatred of Dimitri aside. Roman reminds Niko to wear a suit and be at the church in Suffolk the following day.

The next day, Roman calls Niko and asks him where he is at since he is getting married and it cannot happen without his best man. Niko assures him that his is on his way. Later, Niko arrives at the church and witnesses Roman and Mallorie get married. Outside, the crowd cheer as Roman and Mallorie exit the church. During the celebrations, a bald man walks up behind Niko. He draws a pistol, saying "A gift from Dimitri Rascalov". Niko wrestles with him and, after two stray shots are fired, succeeds in forcing the pistol back and shooting the assassin in the head, killing him instantly. Roman, however, was accidentally shot dead during the struggle.

Mallorie breaks down into tears. Furious at his cousin's death, Niko repeatedly shoots the assassin's body until the gun runs out of ammunition, and then starts kicking it. Little Jacob calms him down and promises Niko that he will track down Dimitri and call him when he does, before telling Niko to go home. The next day, Niko wakes up in his apartment in Bohan, before saying "Roman... I'm so sorry, cousin." to himself. A few minutes later, Niko receives a call from Little Jacob, explaining that he's found Pegorino's men and asks Niko to meet him in Koresh Square in Alderney, which triggers the final mission.

“You fucking double crossing immigrant shit!”
— Jimmy Pegorino, angered at Niko's decision in not going through with the Deal, before shooting at the crowd.

If the player chooses the "Revenge" ending, Roman will call Niko on the morning of the wedding day, claiming that it is the happiest day of his life as he is getting married to Mallorie. Roman reminds Niko to wear some nice clothes and be at the church at 10am.

Later, Niko calls Kate and tells her that he took her advice. Kate tells Niko she is happy that Niko "cut his ties" with Dimitri and tells him to pick her up for the wedding. Niko meets Kate at her mother's house, before driving to the church in Suffolk. During the journey, Niko explains his desire to try and "walk away" from his criminal lifestyle, and that he also wants to try and "get to know" Kate better.

During the celebrations, a black car drives past and the passenger window rolls down to reveal an enraged Jimmy Pegorino, who shoots at the crowd with an assault rifle whilst shouting "You fucking double crossing immigrant shit!" at Niko. The car speeds off and it is revealed that Kate has been shot. Roman shouts for someone to call an ambulance, but Niko reveals that Kate is already dead. Roman tells Niko he should not blame himself, but an enraged Niko lashes out at Roman and claims that it is his fault that Kate died. Little Jacob and Roman attempt to calm Niko before telling him to go home.

The next morning, Niko wakes up in his apartment in Bohan, before saying "Damn, I was meant to protect her!" or "Poor girl... She should never have gotten close to me." to himself. A few minutes later, Niko receives a call from Little Jacob, who explains that he and Roman have found some of Pegorino's men in Koresh Square in Alderney. Meeting Jacob and Roman will trigger the final mission. 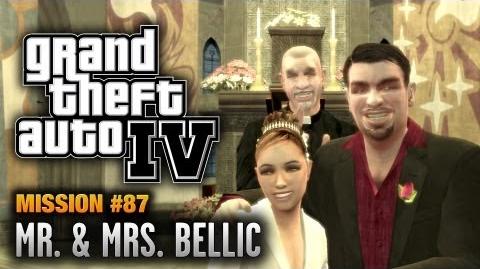 "A man, possibly a jilted lover shot the groom, 31-year-old Roman Bellic and then turned the gun on himself. Police are looking for the groom's cousin for questioning, although he's not a suspect."

"Brides may worry about a guest looking more beautiful than them on their wedding day, but they don't expect the woman to steal their thunder by getting shot. Well, that's exactly what happened in Suffolk at the wedding of Roman and Mallorie Bellic. A guest, Kate McReary, a 28-year-old woman from Dukes was killed in a drive-by shooting. The groom's cousin, 30-year-old Niko Bellic, is said to have left the scene soon after that shooting. He's wanted for questioning by police, but not as a suspect."

"Speculation is rife as to the motive of this crime. The killer may have been a jilted lover, a terrorist, a man driven mad by violent video games or the member of a sick death cult. Police urge the residents of Liberty City to avoid any type of public gathering in case there are more attacks planned."

"Roman and Mallorie Bellic's wedding was like something out of a storybook, until gunfire spoiled the party. Soon, one of their guests lay dead and the memory of their union would be soured forever. The couple refused to comment upon the tragedy, but witnesses report seeing a car pull up next to the wedding party and firing shots from the window. Police are looking for the culprit. Mr. Bellic's cousin was reported to have left the scene soon after the murder. He is being sought for questioning in the case but not as a suspect."