Yes
The Mr Whoopee is an ice-cream van featured in every 3D Universe game except Grand Theft Auto Advance.

The Mr Whoopee is evidently designed as a vehicle based on a van or box truck, intended to carry ice creams and other frozen foods.

In Grand Theft Auto III and Grand Theft Auto: Liberty City Stories, the Mr. Whoopee has a unique, modern design, with the headlights and grille resembling those of a 1986 Ford Transit, while the van itself can also resemble a deformed 1983-1991 Toyota Van. 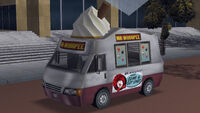 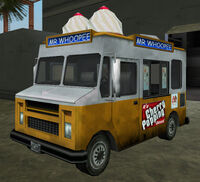 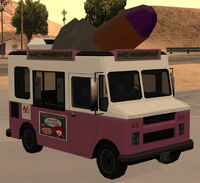 Due to its size, the Mr Whoopee is fairly slow and suffers in steering and braking. In addition, the Boxville-style renditions are top heavy and is prone to rolling if not driven carefully. The van in GTA San Andreas is significantly slower than the van in other games. The van in GTA Liberty City Stories can also easily blow up after few collisions, thereby making it the weakest vehicle in GTA Liberty City Stories. The GTA III version, strangely, takes no physical damage, making it a good vehicle to drive when under fire. Most renditions have powerful-sounding diesel engines, however, GTA III's van has a gasoline engine, while the San Andreas van has a much weaker-sounding diesel. The Mr. Whoopee vans are front-wheel drive in GTA Vice City and GTA III, and rear-wheel in all other games.

The "Ice Cream Truck", an earlier iteration of the Mr Whoopee in GTA III prior to the game's release.
Add a photo to this gallery

The Mr Whoopee is one of the rarest vehicle in the game, along with Flatbeds and some other vehicles. Finding it in traffic is very difficult. However, on mobile versions, the truck is much easier to find, though still uncommon.

Retrieved from "https://gta.fandom.com/wiki/Mr_Whoopee?oldid=1208672"
Community content is available under CC-BY-SA unless otherwise noted.