GTA Wiki
Register
Don't have an account?
Sign In
Advertisement
in: Vehicles, Vehicles in GTA IV, Trucks,
and 4 more
English

Replacing the Mr Whoopee van from the 3D Universe, the Mr Tasty is a large van tailored to carry and sell ice cream. The overall design of the truck resembles a 1998 Chevrolet P30 Ice Cream Truck. It is a variant of the Brute Boxville, but carries numerous differences; the van is overall much smaller in size, both length, height and width, and the wheelbase has been increased respectively. The van has a square grille with painted elements, twin round headlights as oppose to square ones, a slightly more profiled front bumper with a centrally-mounted license plate added. The shape of the grille and hood has also been changed, with a slight hump. The secondary mirrors found on the standard Boxville have been removed. Side awning has been added to the sides of the roof, as well as four ice creams added to the front and rear. Two different air conditioning units have been added to the roof. Side trims are found on the sides of the rear unit. All badging has been removed. The van also has a different rear design, with cargo loading doors as opposed to the standard hinged doors, each with ventilation ports on them, a shorter rear bumper without side arms, and the addition of circular reversing lights alongside the tail and brake lights. Being an ice cream truck, both sides of the van have sliding side windows, partially and permanently open. The interior is relatively basic, with an ice cream machine and several storage units.

Like the Mr. Whoopee, the vehicle's name, color scheme and livery is a parody of the official Mister Softee ice cream truck. The vehicle bears Cherry Popper ice cream logos on the sides. 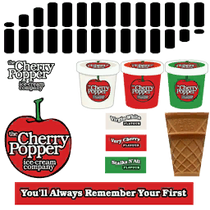 Its large build makes the Mr. Tasty a poor performer on the road. As expected from a large and heavy truck, the vehicle is only capable of moderate speeds, and suffers from poorer acceleration and cornering. Its weight, however, can be exploited when using the vehicle to ram smaller vehicles off the road, but its resistance to damage is not particularly impressive. Food and Beverages are not sold in this vehicle like any other vendors do. Hitting the interaction button near to the vehicle will only have the player hail for a nearby taxi.

In other words, the Mr Tasty performs roughly similar to its equivalent, the Boxville. However, unlike the Boxville, it only has room for 2 occupants rather than 4, making it even more undesirable.

The Mr. Tasty comes equipped with several jingles which can be toggled by tapping the horn button. Turning it on and off will produce a different jingle each time. The faster the truck moves, the faster the tempo of the jingle. Reversing the truck will reverse the jingle. When the vehicle is moderately damaged, the jingle begins to distort. When severely damaged, the music does not play at all, although the horn still functions.

The following is a list of the jingles played by the Mr. Tasty, five of which are based on traditional folk songs and orchestral pieces:

Reversing with no jingle, the van makes a "ding-a-ling" noise, rather than the standard "beep" found on most industrial vehicles.

If the player calls ZiT! while the GTA IV jingle is playing, it will activate a health cheat (code-named "DOC" on the cell phone), which blocks certain Trophies/Achievements.