In Grand Theft Auto III and Grand Theft Auto: Liberty City Stories, the Mr. Wongs is a Mule-based laundry van, evidently named after the company that uses these, Mr. Wong's Laundrette. It is basically identical to the Triad Fish Van, a truck also based on a Mule. Like the Mule and the Triad Fish Van, the Mr. Wongs is also available in a variety of body colors.

When entered by the player, the truck is referred to as "Mr Wong's" (without a period in the end of "Mr" and an apostrophe before the "s"), but the period is present on the company graphics of the truck, and both the period and the apostrophe appear on the logo on the window of the store. Much like the launderette itself, the van also features the slogans: "Liberty's First Choice For All It's Dirty Laundry" and "If It Ain't Wong, It Ain't White" (a pun on the phrase "If it ain't wrong, it ain't right").

In Grand Theft Auto Advance, the vehicle, which name is shortened to be known simply as the "Wong", is the gang car of the Triads, substituting the role of the Triad Fish Van (known in the game as the Belly). It is now depicted more like a truck instead of a cargo van, but it is effectively the largest truck in the game. 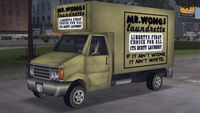 The Mr Wongs, as seen in Ghost Town.