"If it ain't wong, it ain't white" (GTA III, GTALCS and GTACW)
"Liberty's first choice for all its dirty laundry"
"Wong=White!" (GTA IV)

3D Universe
HD Universe
“Where things get cleaned, laundered and boiled in water.”

Their slogan is a reference to the saying "If it ain't wrong, it ain't right" and also means that Wong's Launderette specializes in cleaning clothes. The Chinese characters "黃=白" is meant to be translated partially to "Wong equals white," but if translated completely it would be "yellow equals white."

The store is owned and operated by Mr. Wong and the Triads. Initially, it payed protection to the Leone Family but stopped paying its protection money and began paying to the Triads. After a Triad ambush, Toni Cipriani sends Claude to destroy their laundry vans. This forced them to begin paying the Leones again. Toni, sensing a trap, does not trust the launderette and sends Claude to pick up the money to be cautious. Behind the laundrette, Claude picks up the payment, but is ambushed by Triad goons. After killing the Triads and escaping this skirmish, the Leones and the Triads go to war. It is unclear whether or not they began paying the Leones after the Triads lose the war and Salvatore Leone's subsequent death. The launderette had a fleet of laundry vans seen during the mission "Taking Out the Laundry" but other than that the launderette only has one van parked behind their business. The launderette can be entered by using the gameplay moves faster cheat and sprinting into the wall which then gives you access to the building.

In Grand Theft Auto IV and Grand Theft Auto: Chinatown Wars, the store is once again owned by Mr. Wong and is located on the corner of Dillon Street and Tuscarora Avenue in Schottler neighborhood of Broker. The company name appears on Pony vans and Benson trucks. His laundrette is ironically a front for a money laundering operation headed by Wong.

In the Grand Theft Auto: Chinatown Wars section of the Rockstar Games Social Club, the laundrette is the subject of a Flash game, in which the player collects valuables dropped from the washing machines. Playing the game unlocks money and multiplayer clothing for use in Chinatown Wars. 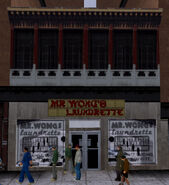 The laundrette in GTA IV. 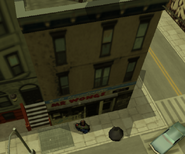 The laundrette in GTA Chinatown Wars.

The Pony in GTA IV with the company livery.

Beta concept render of the Mr Wongs livery for the Pony.

Artwork of the laundrette at Rockstar Games Social Club.